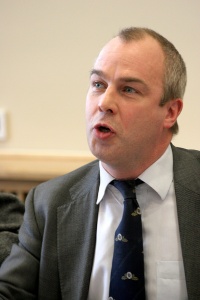 Paul Farrelly has been the Labour Party MP for Newcastle-Under-Lyme since 2001.[1] In the 2015 general election, Farrelly retained his seat with 38% of the vote, and a majority of just 650 over closest competitor Conservative candidate Tony Cox.

‬‬ Farrelly's constituency includes two oil and gas licence blocks, awarded by the Oil and Gas Authority under the 14th licensing round in 2015. One coal bed methan licence was awarded to Norcors and one shale licence went to IGas. There are plans to conduct 2D seismic surveying, but no applications or plans for shale wells are currently underway. [2]

Farrelly has a mixed voting record on fracking. [3]