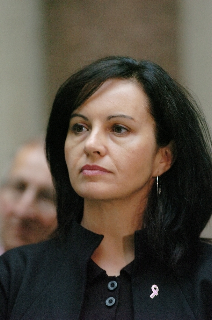 Caroline Flint has been the UK Labour Party Member of Parliament (MP) for Don Valley since 1997.

In October 2011 Flint was appointed shadow secretary of state for energy & climate change, in Ed Miliband's Shadow Cabinet - a role which she left in September 2015.

Flint retained her constituency seat in the 2015 general election, gaining a majority of 8,885 and 46 per cent of the vote. [1]

In May 2015 Flint announced that she will stand in the contest for Labour's deputy leadership. [2]

She joined the Public Accounts Committee in November 2015. [3]

In October 2010, Caroline was elected to Labour's Shadow Cabinet and was subsequently apppointed as shadow secretary of state for communities and local government by Labour Leader Ed Miliband.

Having served as the minister for Europe at the Foreign and Commonwealth Office from October 2008, Caroline left the Government on 5 June 2009.

From January - October 2008, Caroline Flint was appointed to the post of minister for housing. As housing minister, Caroline's achievements included: a £1billion housing package, new shared ownership and shared equity schemes to help first time buyers and a mortgage rescue scheme. She also shortlisted 15 locations for future eco-towns - the future of low carbon living in Britain.

From 2005-2007 Caroline was minister for public health, first as parliamentary under secretary and then as minister of state.

Her first Ministerial appointment, in 2003, was as parliamentary under secretary of state at the Home Office, before being moved to the Department of Health in 2005. [4]

‬ Flint has expressed both strong concern and limited support for fracking. In January 2015, commenting on Cuadrilla's application to frack in Lancashire, she said:

'David Cameron has repeatedly ignored people’s genuine and legitimate environmental concerns over shale gas. Despite clear evidence that existing regulations for shale gas are not fit for purpose, the government seems prepared to push ahead with fracking at any cost.' [5]

In an article in The Guardian shortly after, she wrote:

'With a regulatory regime that is fit for purpose it is feasible that shale gas could have a positive impact on our security of supply. 8 out of 10 homes still rely on gas for heating – this is not a fuel that we can do away with overnight. In the context of declining North Sea reserves, a new, indigenous source of gas could help to reduce our dependence on imports. The Committee on Climate Change concluded that the development of shale gas could actually lead to a slight decrease in UK emissions, since it is likely to be cleaner than imported Liquefied Natural Gas from Qatar.' [6]

She criticised the government for passing a vote that would allow for fracking to take place in protected wildlife areas. [7]

She also criticised the Labour Party's announcement that a Labour government would support a national ban on fracking, saying:

'If you are going to say 'ban an energy source', you have got to fill it with something else. We can't just be against things. We have to explain what our policy is and what we stand for when it comes to energy.' [8]

In November 2016, Flint called for the tax raised from the shale gas industry to spent on developing domestic renewable energies. [9]

Flint's constituency includes four oil and gas licence blocks, awarded by the Oil and Gas Authority under the 14th licensing round in 2015. Two shale licences were awarded to IGas, one to Cuadrilla, and one abandoned mine methane vent licence to Alkane Energy. There are plans for three shale wells, one hrz frac well and 2D and 3D seismic surveying; no applications are currently underway. [10]

In July 2016, Flint attended an 'exhibition' held by IGas and met with representatives for the company in October. [11]

Flint has a mixed voting record on fracking. [12]

Caroline Flint, Nuclear power is not the only answer – but it’s an important part of our future, Labour List, 21 October 2013