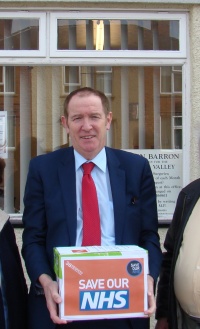 Sir Kevin Barron has been the Labour MP for Rother Valley since 1983.[1]

Since 2013, he has chaired separate Standards and Privileges Committees. As chairman, Barron was responsible for overseeing the ethical standards in the Commons and monitoring any questionable activities by MPs. On March 2016, Barron stepped aside from chairing the standards committee. Since 2010, he has served on the Speaker's Committee for the Independent Parliamentary Standards Authority.[1]

In 2006, Barron was one of four senior politicians who pulled out of receptions organised by Bell Pottinger Public Affairs following revelations that the firm was charging clients to meet them.[2]

In November 2015, Barron became a member of the Select Committee on Privileges.[3]

On October 2012, while standing as the chairman of the standards and privileges committee, Kevin Barron was implicated in an expenses scandal when it was revealed he claimed £1,500 of taxpayer money a month to rent a home belonging to Jon Trickett, the former shadow minister for the cabinet office.[4] Barron began renting the home after selling his tax-funded flat for a profit of almost £500,000. By renting property from another MP, Barron was exploiting a loophole that allowed him to continue to claim rent allowance. The rental agreement was terminated after it was revealed.

On March 2016, it was revealed that Barron, while still serving as the chairman of the standards committee, agreed to arrange events for a group of pharmaceutical companies in Parliament in return for personal payment of over £9000.[5] The agreement included allowing companies to sponsor events in the House of Commons. Amongst them were the Japanese Pharmaceutical Group, with which he had met over dinner three times.

His activities were in direct breach of parliamentary rules which prohibit MPs from making any personal financial gain using Commons resources. Barron said the proceeds of the arrangement had all been given to charity, and therefore was not illegal. Shortly after however, Barron stepped down from his role and announced he had referred himself to the parliamentary standards commissioner.[6]

The disclosures came after Tommy Sheppard, another MP sitting on the standards committee, failed to declare shareholdings worth more than £200,000, and Geoffrey Cox neglected to register more than £400,000 of outside earnings.[7] A campaign group has since called for the committee panel to be radically overhauled.[8]

Barron said that he was 'very disappointed' about the decision. 'I will continue to fight this decision as I still believe there are too many unanswered questions around fracking,' he tweeted. [10]

Barron had previously criticised Ineos' engagement with local communities over both the proposed Hartill and Woosetts shale gas sites in his constituency in August 2017:

It is not acceptable for people to be in the dark about plans that will affect their lives. It was outrageous that the first time many people in Woodsetts knew about the plan was when court ordered injunction notices were posted around the village. I attended Woodsetts Parish Council meeting on Wednesday night and made it clear to the INEOS representative that this was not acceptable and they must engage in a much more proactive way. I am also in the process of arranging a meeting with their directors to make sure the message is clearly heard at the highest levels within the company. I fully understand that these plans will be causing a huge amount of worry for people in the two villages affected and I will be doing all I can to try and alleviate some of that worry. [11]

In June 2019 Barron announced he had joined the Woodsetts Against Fracking residents’ campaign against Ineos plans to explore for shale gas in their village.

This came ahead of a public inquiry opening on 11 June into Ineos' drilling scheme for Woodsetts. [12]

Previously, Barron had voted against greater regulation for fracking in the UK to extract gas in national parks and had abstained on the high-profile Infrastructure Bill vote in January 2015.

In March 2018 Barron was appointed vice-chair of a new Westminster all-party group on the impact of commercial fracking in the UK. The group held an evidence session on the impacts of fracking in June 2018.