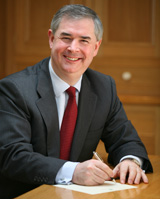 Between March 2013 and February 2014 Cox was the top earning MP for outside earnings. A practicing barrister, he often charges in excess of £600 an hour for legal services and earned £397,039 in the year.[3]

In October 2015, Cox was forced to resign from the Parliamentary standards committee after failing to declare hundreds of hours of legal work outside of parliament on time. The MP claimed that practising law outside of his governmental duties gave him 'practical experience of a world outside politics'. [5]