From Powerbase
(Redirected from Center for Policy Studies)
Jump to: navigation, search 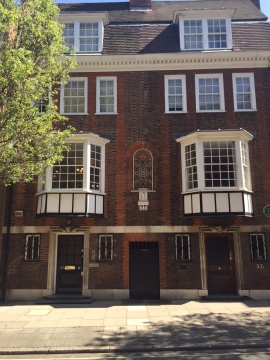 The Centre for Policy Studies is the free market think tank set up by Sir Keith Joseph which is most associated with the rise of Margaret Thatcher. During Margaret Thatcher's tenure as Prime Minister, the CPS enjoyed a considerable influence over policy, which declined rapidly following the departure of Keith Joseph from government in 1986, and Thatcher's removal in 1990.

The CPS 'develops and publishes public policy proposals and arranges seminars and lectures on topical policy issues, as part of its mission to influence policy around the world. It also maintains a range of informal contacts with politicians, policymakers, civil servants and the press, in Britain and abroad' and 'can claim a large share of the credit for initiating policies such as privatisation, trade union reform, council house sales, pensions deregulation, education reform, free trade, health service reform and the recent restructuring of the tax system to favour traditional families.'

CPS was set up in 1974 by Margaret Thatcher, Keith Joseph and Alfred Sherman. Sir Keith Joseph was the founder of the Centre for Policy Studies (CPS) and the President was Margaret Thatcher. The full-time director was Alfred Sherman, who had started his political life on the extreme left. Keith Joseph, who was head of policy at the Conservative Party between 1975 and its successful election in 1979, was strongly influenced by the Institute of Economic Affairs. He helped set up the CPS as a kind of politicized version of the IEA, with the aim of promulgating its ideals around the political establishment - in particular, around the Conservative Party. [1] Some controversy surrounds the way the CPS was set up:

It was a fraud. Keith Joseph went to Ted and asked his permission to set up a fund to see how private enterprise worked in other countries. Then he went round the City saying he had Heath’s permission to raise the money. Then it became the Joseph/Thatcher power base for attacking everything Ted stood for.[2]

The CPS very quickly became the centre for the propagation of anti-Heath views — notoriously stage-managed at Joseph’s Preston Town Hall Speech on September 1974, which advocated greater unemployment to tackle inflation — as a challenge to his leadership.

With offices in Westminster it was the base for publishing books and pamphlets on monetarism and right-wing ideology, the speeches of Thatcher and Joseph, Samuel Brittan and others. According to the Guardian: ‘In those “heroic” days it was little more than an office employing Sherman to draft speeches for Joseph. It attracted a number of people who had not been active Tories but became influential later, notably David Young (later Lord Young of Graffham) and John (later Sir) Hoskyns.’ [3]

The CPS became the formal political manifestation of the ideology that had so far been propagated by the nominally independent Institute of Economic Affairs. Both were in the propaganda business. Both had offices in relatively unassuming private houses in S.W.1. Both poured out a stream of publications designed partly to reassure the faithful but first and foremost to proselytize.[4]

The CPS concentrated its propaganda on the universities, while the IEA tried to influence ‘Fleet Street’ and the City. The “economics” propounded by the IEA, which were openly taken up by the Conservative government in 1982, were, inter alia:

… more denationalisation of industry; an extension of private medicine; the introduction of education vouchers...; and more anti-union legislation.[5]

Founded in the 1950s by Lord Ralph Harris, the IEA was the first organisation in the UK to publish Milton Friedman’s monetarist economics. According to investigative journalists it later took an active part in the cabals which covertly drove the Conservative party rightwards in the 1970s, in alliance with the ultras in the Secret Service.[6] Arthur Seldon, deputy for Lord Harris wrote a book with the notorious MI6/CIA operative, Brian Crozier, who was involved in various nefarious covert operations through pan-European far right organisations such as “the 61” and the Pinay Circle. Lord Harris himself shared a platform with Crozier and John Gouriet of the Freedom Association (founded by the McWhirter twins) addressing the officers of the Army Staff College at Camberly circa 1975. This was an effort to encourage direct military intervention against “internal subversion (i.e. the left).[7]

The IEA are well known for their work in the field of privatisation. It was they who commissioned Stephen Littlechild in 1981 to write the paper “Ten steps to denationalisation,” Littlechild later became one of the four “regulators” who overseen 20% of the UK’s GDP in the form of the four utilities Gas, Water, Electricity and Telecommunications. They also influenced the Conservative Government’s minimum wage policy,[8] promoted the notion that “non-traditional” families (i.e. black and Asian) produce more delinquent children and advocating that “student loans should be charged at a higher rate of interest.”[9] Mrs Thatcher herself stated that:

What we have achieved could never have been done without the leadership of the IEA.[10]

In a March 2009 presentation Tim Montgomerie and Matthew Elliott described CPS as part of the infrastructure of the conservative movement in Britain.[11]

In the Telegraph in 2006, CPS director Ruth Lea suggested that we need not worry about climate change because, when the earth’s climate changed before, it gave rise to civilization (Lea, 2006). She was denounced by the man whose research she claimed to be championing. Nick Brooks of the University of East Anglia suggested that she had wilfully misinterpreted his work. “The distortion of science for ideological purposes,” he wrote, “has a long history, and the results are generally ugly.”[13]

George Monbiot argued that this was part of a disinformation campaign.[14] The Royal Society’s president, Lord Rees, sent the Telegraph what must be one of the most damning letters it has ever received.

In her sixth article in five months which misrepresents the science of climate change in the Business Pages of The Daily Telegraph, Ruth Lea erroneously asserts that “there is wide scientific disagreement” about the likely impact of climate change.[15] In fact, the peer-reviewed scientific literature, of which Lea appears to be completely unaware, shows that continued growth in greenhouse gas emissions will lead to a rise in global average temperature of between 1.4 and 5.8 centigrade degrees by 2100….[16]

Monbiot revealed the campaign of disinformation was started by the tobacco company Philip Morris in a convoluted attempt to distract attention from its funding of a campaign to deny the effects of tobacco by funding people to deny climate change as well. This heavily-funded lobby has produced some odd bedfellows, such as the Revolutionary Communist party (RCP) who have traveled from the fringes of the left to the extremities of the pro-corporate libertarian right:

In 1988, it set up a magazine called Living Marxism, later LM. By this time, the organisation, led by the academic Frank Furedi, the journalist Mick Hume and the teacher Claire Fox, had moved overtly to the far right. LM described its mission as promoting a “confident individualism” without social constraint […] It campaigned against gun control, […] against banning tobacco advertising […] and child pornography, […] and in favour of global warming, […] human cloning and freedom for corporations. It defended the Tory MP Neil Hamilton […] and the Bosnian Serb ethnic cleansers. […] It provided a platform for writers from the corporate thinktanks the Institute for Economic Affairs […] and the Center for the Defense of Free Enterprise. […] Frank Furedi started writing for the Centre for Policy Studies […] and contacting the supermarket chains, offering, for £7,500, to educate their customers “about complex scientific issues”.[17]

The Centre for Policy Studies promotes “the opening up [of] state monopolies” in health. It has stated:

'The CPS advocates greater choice and diversity of provision, opening up state monopolies to new providers and putting greater power and responsibility in the hands of parents and patients.'[18]

Former CPS director, Ruth Lea, was an advisor to the lobby group Nurses for Reform, which called the NHS "a Stalinist, nationalised abhorrence".

The CPS is behind the 2017/18 campaign for a 'Royal Commission on the NHS', which calls for the 'politics' to be taken out of the NHS and, in the words of CPS director Robert Colville, 'get to the bottom of what’s ailing the NHS, and what needs to be done to its structures and funding to put it in a position to deliver the best outcomes on a basis that is sustainable over decades'.[19] CPS chair Maurice Saatchi and Dominic Nutt wrote a report in 2018 that 'sets out the remit and priorities that such a Commission should adopt'.[20]

In June 2014 the think tank warned that measures in the Queen's Speech had not gone far enough to encourage investment in unconventional gas production. It said Britain risked being 'held economic hostage by Russia' unless the country embraces fracking, given its growing dependence on foreign imports for almost every form of fossil fuel, from coal to natural gas. [21]

This followed its release of an earlier report by Richard and Elizabeth Muller in January 2014 which argued that serious environmentalists needed to rethink their opposition to fracking based on the immediate dangers posed by air pollution rather than the 'distant' long-term threat of global warming. [22]

In December 2017, CPS published a report authored by the Conservative MP, Chris Philp, called 'Homes for Everyone'.[23] Its recommendations include: removing Section 106 obligations on developers (on developments of under 100 units) so that they pay only the Community Infrastructure Levy (at a higher rate); removing the affordable housing requirement entirely for developments under 20 units; creating “Pink Zones” (so called because they are subject to less red tape), which place fewer requirements on developers; an increase in the rate of surplus public land disposal; and bringing in a new system of compulsory purchase orders based on the value of the property pre-planning consent, which then offer the current owner 50% of the expected uplift in value.

It is not known who funded the report, but it had input from Oliver Letwin, Tony Pidgley chairman of housebuilders Berkeley Group and Richard Blakeway of Policy Exchange.

Against the Tobin Tax

The Centre for Policy Studies owns and produces the CapX website. CapX was founded, it says, 'to make the case for popular capitalism'. It is edited by Robert Colvile, former head of comment at the Telegraph. Listed funders of CapX are Templeton Religion Trust and the Rising Tide Foundation.[25]

The board of the CPS consists of 12 men and one woman:

The CPS previously (c2015) listed members of its 'council'. These included: