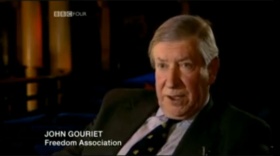 John Prendergast Gouriet (1 June 1935 – 4 September 2010) was a right-wing activist best known as a founder of the National Association for Freedom (now the Freedom Association). He pioneered the use of legal action to frustrate campaigns for workers' rights and racial equality. On his death National Association for Freedom referred to him as its ‘first and greatest Director’, noting that he ‘paved the way for the great reforms introduced by Lord Tebbit and the Thatcher Government’. [1]

Gouriet was born in London on 1 June 1935, the only son of a survivor of the Somme who went on to fly fighters in combat. He was educated at the elite public school Charterhouse and then attended the military training school Sandhurst. [2] He was commissioned into the 15th/19th King's Royal Hussars at the end of 1955 and began active service in Malaya. [3] This was the period of what is generally known as the ‘Malayan Emergency’. The ‘emergency’ was essentially a revolt against British rule by the poor and politically alienated Chinese population in Malaya who had previously been funded and armed by Britain in their fight against Japanese occupation. [4] The ‘counterinsurgency’ operation was, the Foreign Office conceded in a secret file, ‘very much a war in defence of [the] rubber industry’, which was an important source of wealth for Britain. [5]

Britain conducted 4,500 airstrikes in the first five years of the Malayan war, [6] and detained 34,000 people during the first eight years. These detainees were, according to the Foreign Office, people ‘who are a menace to public security but who cannot, because of insufficient evidence, be brought to trial’. [7]

An integral part of Britain's repressive operation was Harold Briggs’s ‘Brigg’s Plan’, which began in 1950 and targeted Malaya’s Chinese population through a ‘resettlement’ programme:

A community of squatters would be surrounded in their huts at dawn, when they were all asleep, forced into lorries and settle in a new village encircled by barbed wire with searchlights round the periphery to prevent movement at night. Before the ‘new villagers’ were let out in the mornings to go to work in the paddy fields, soldiers or police searched them for rice, clothes, weapons or messages. [8]

For a year until their disbandment in 1960, [Gouriet] was second-in-command of a company of the Somaliland Scouts; during this period he raised an orphaned cheetah cub in his bedroom.

Gouriet was adjutant of the Trucial Oman Scouts until 1963, then served as GSO3 Intelligence to the director of operations in Borneo. After Staff College he passed up promotion from major to become a squadron leader with his old regiment in Germany. He retired from the Army in 1973 when deputy assistant adjutant and quartermaster-general at the MoD. [9]

After leaving the military Gouriet joined the merchant bank Rea Brothers as an assistant to Sir Walter Salomon, a German born banker who was an active member of the Liberal Party in the 1950s and later became an ardent supporter of Margaret Thatcher. [10] According to his Telegraph obituary: ‘On a grouse-shooting trip as Britain's economic and union problems intensified, he told his fellow guns: “It's no use complaining, then doing nothing" – and there and then decided to "take up the cudgels”.’ [11] Gouriet was subsequently introduced to Ross McWhirter by Ralph Harris of the Institute of Economic Affairs.

Ross McWhirter was murdered by the IRA shortly before the planned launch of the National Association for Freedom which took place on 2 December 1975, with his brother Norris McWhirter under protection by armed police. [12] Recalling the killing years later Gouriet told the BBC: ‘It was almost certainly a KGB crime because there were definite links between the IRA and the Soviet Union and I remain convinced today that that is what actually happened.’ [13]

Most of Naff's campaigning revolved around the Post Office. At Christmas 1976 it supported a Broadstairs woman who set up her own delivery service, challenging the Royal Mail's monopoly.

Weeks later, Post Office unions decided to block all communications to and from South Africa as a protest against apartheid. Gouriet sought an injunction under the Post Office Act, which made it an offence to tamper with the mail. [Labour Attorney General, Sam] Silkin refused his consent and Gouriet challenged this in the High Court, losing but on appeal being granted a temporary injunction by Lord Denning.

Gouriet played a key role in breaking the long running strike over union recognition at Grunwick Film Processing Laboratories in the late 1970s. In his obituary the Freedom Association noted that he ‘masterminded Operation Pony Express’. [17] Operation Pony Express was a covert operation whereby right-wing activists transported the blacked mail from the Grunwick Film Processing Laboratories and posted it around the country.

Gouriet left National Association for Freedom suddenly in June 1978, having fallen out with its chairman, Viscount de Lisle. It was renamed the Freedom Association that winter. [18]