Nurses for Reform is a lobby group created in 2007 which gives the impression that within the nursing profession there is a groundswell of opinion for increased private involvement in the NHS.

NFR calls itself a "growing pan-European network of nurses" that campaigns for "consumer-led reform" of the healthcare system in Britain and abroad that is based on "competition" rather than "bland egalitarianism."[1] It has labelled the NHS "a Stalinist, nationalised abhorrence" and given its seal of approval to a theory that the history behind the NHS and the eugenics movement have common elements.[2][3]

NFR’s director, Helen Evans, wrote that the "really heartening thing" about the controversy over the Cameron meeting was that "dozens" of nurses have since signed up to support NFR,[4] bringing the total number of members who are UK nurses to "a couple of hundred," she said (as of March 2010).[5]

The campaign group was established as a company in 2006 by Dr Evans, a "senior nurse with nearly 20 years’ experience in the National Health Service" and a PhD in health economics from Brunel University.[6]

The couple also together run a lobbying consultancy, Farsight Strategic Political Intelligence. This claims to "predict the health policy output and thinking" of policy makers, opposition politicians, and other opinion formers and markets these insights to, among others, "private hospitals and pharmaceutical companies."[9]

Another member of NFR’s advisory board was Robert McIndoe, who died in 2010. He was formerly a nurse[10] and actor[11] who also ran his own marketing company, The Marketing House.[12]

Clients of The Marketing House have included the CSC Alliance, which is responsible for the delivery of the NHS national IT programme for large parts of England. McIndoe’s firm was employed "to develop, lead, and direct the . . . team in its communication strategy to reach 275 000 NHS staff . . . with the central objective of winning them over to the largest civil IT project in the world."[13] McIndoe has also worked for two firms vying to get into the health market, Capita (March 2006 to October 2007) and Logica (from December 2007).[14]

NFR also has links to a network of think tanks that favour privatisation. For example, it was a member of the Stockholm Network, a group of more than 130 free market think tanks, where Tim Evans was formerly development director.[15] The Stockholm Network says it pushes for "more consumer-driven health care" through reform of European health systems and markets.[16]

Another advisory board member with links to this network is Eamonn Butler, cofounder of the Adam Smith Institute,[17] a Westminster based think tank and member of the Stockholm Network.[18] Tim Evans is a senior fellow and Helen Evans a fellow of the institute,[19] which argues for the transformation of today’s "state monopoly providers into independent, competitive ones."[20]

Another adviser is the economist Ruth Lea, director of the Eurosceptic campaign group Global Vision.[21] Lea formerly headed the Centre for Policy Studies, a free market think tank and Stockholm Network member that also promotes "the opening up [of] state monopolies" in health.[22] Another is Shane Frith, former managing director of the Stockholm Network.[23] Frith now runs the free market think tank Progressive Vision. This states that the NHS is envied by few outside Britain "apart from a number of socialist ideologues" and advocates "change to a more effective" health system.[24] Frith is also behind the Doctors Alliance, "a pan-European movement of reform minded doctors" that was also involved in "influencing the debate on the need for market-oriented health system reform across Europe."[25]

The following is a January 2010 article by Tom Harris MP for labourlist.org:

Nurses for Reform and David Cameron: the unanswered questions

Last month, David Cameron spent an hour ensconced in a private meeting in his House of Commons office with Dr Helen Evans.

Dr Evans is the director of a right-wing libertarian “think tank” called Nurses for Reform, which, according to its website:

believes that the government should re-cast the NHS as simply a funder of last resort alongside an insurance and self-funder based market. It believes that the state should set free – through a range of full blown for and not-for-profit privatisations – all NHS hospitals and healthcare provision.

I had been invited by him to discuss NFR’s ideas on the future of health policy and presented a range of ideas. Amongst others, these included the end of national collective pay bargaining for nurses and doctors, the view that the state should not own or have any of its agents manage hospitals, a world of widespread health advertising (to overcome problems of patient ignorance through trusted brands) and a dramatic liberalisation of hospital planning laws. On this latter point, central government should have no say in when and where any hospital is opened or closed.

If he becomes Prime Minister I have no doubt NFR will meet with him and his policy team again.

I share her confidence. If he becomes Prime Minister.

No doubt the Tory Party will claim that, as an aspiring PM, Cameron has to meet a whole range of opinion formers and interest groups across the NHS. Yet he has consistently stated that his party has changed, that it is no longer antipathetic to the NHS. “We’ll cut the deficit but not the NHS,” he told us, unconvincingly, this week.

So if his party really is committed to the values of the NHS, if he really has distanced himself from the cranks in his ranks who describe the NHS as “a 60-year mistake”, why on earth is he even meeting a group that advocates large-scale privatisation of the NHS? An organisation which criticises the American healthcare system for being "a highly planned, regulated and government funded system."

Interestingly, there is no mention on the NFR website of the presence of Shadow Health Secretary Andrew Lansley at the meeting. Did Cameron take the meeting on his own, and if so, why?

And please take a look at the links section on the NFR website. There you’ll find links to all sorts of NHS-friendly organiations such as the Adam Smith Institute, the Libertarian Alliance and (inevitably) the Taxpayers' Alliance.

Dr Evans expounds her views over at the Adam Smith Institute site, in an article entitled “The micro-politics of hospital privatisation”, in which she calls for the NHS to be renamed the “National Health SYSTEM” (her capitalisation).

So what role will the NFR have on Conservative health policy if the Tories form the next government? Dr Evans seems to think that, following her meeting with the Tory leader, there will be some kind of role for her organisation.

I think we should be told.

And I think we should be concerned.[27]

Cameron woke on New Year’s Day to a press report of his meeting with NFR headlined "Cam’s plan to pan NHS",[28] forcing him to restate his "wholehearted commitment" to free health care and to reassure the public that the NHS will be safe in Conservative hands.[29][30]

In February 2010 the NFR website was prominently promoting a downloadable publication by Helen Evans, "Sixty Years On - Who Cares for the NHS?" (2008), which is published by the Institute of Economic Affairs. The gist of the publication is clear from the subhead to the first chapter: "Questioning the state’s role in healthcare". The second chapter is headed, "The historic failure of the National Health Service". The final chapter is entitled, "From government failure to a free market?"[33]

Immediately above the advertisement for "Sixty Years On" was an equally prominent link to the US neoliberal think tank, the Heritage Foundation.[34] 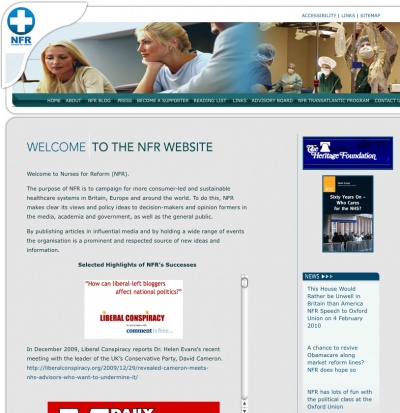