Centre for the New Europe 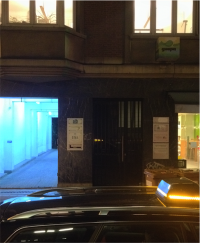 The Centre for the New Europe was a think tank based in Brussels between 1993 and 2008. It hosted events for policymakers, parliamentarians and journalists, and publishes reports and books on a range of libertarian topics. It promotes "pro-market" and "European liberal" policies for the European Union.

Founded in 1993 by a Belgian lawyer and a Belgian journalist after a meeting in the Hilton Hotel on the Toison d'Or in Brussels, it is very strongly pro-free-market, with a particular focus on the privatisation of healthcare. It is a member of the International Policy Network and regularly collaborates with other members of the Atlas Economic Research Foundation network. It is also a member of the Stockholm Network of European free-market think tanks.

CNE-USA was established to allow for tax-deductible American donations to the Centre, although the organization itself does not operate in the US.

The funding of the CNE is non-transparent. It failed to answer a think tank survey by the Corporate Europe Observatory in 2005. However, the annual reports of Exxon Mobil reveal that CNE in 2003 and 2004 received $40,000 and $80,000 respectively for its "Global Climate Change Education Efforts".

We find that support for liberal ideas--free trade, social tolerance, economic liberty--extends far beyond Europe's Liberal parties. Therefore, we back no party or programme. We find that liberalism has friends and enemies in every party. We hope to unite its friends and persuade its enemies."[1]

"The Kyoto Protocol is failing because it is ineffective, costly, and unfair. It is also 'scientifically flawed' and not needed. It is likely to be replaced by other treaties and regulations to limit the use of energy and restrict economic growth. Such developments must be attacked with a strategy that uses both science and economic analysis."[2]

6 September, 2000 Released the transcript of a talk given by S. Fred Singer, entitled "Climate Policy - From Rio to Kyoto: A Political Issue for 2000 and Beyond". Singer promoted his ideas that the climate is not warming, and therefore there is no justification for the Kyoto Protocol.[3]

Other funding sources are not disclosed. However, according to Corporate Watch:

A source in Brussels told Corporate Watch that the CNE receives 50% or more of its funding from Pfizer. The sums involved are very large. The Netherlands-based Edmund Burke Foundation took over $400,000 from Pfizer in 2001-5 and imploded when Pfizer stopped funding them.[5]

Documents in the Truth Tobacco Industry Documents archive suggest that the Centre was set up by the Hudson Institute. A May 1992 internal Philip Morris Monthly report noted the tobacco firm was 'Evaluating with PMI the prospects for support of Hudson Institute's newly formed Center for the New Europe, to be based in Brussels'.[6] Another Philip Morris document on European think tanks notes that the CNE is 'heavily supported by Pfizer'.[7]

According to a briefing paper by two lobbyists from Jedco Conseil based just outside Geneva, the Centre for the New Europe ran a series of Liberty Lunches which were comparable to those run by the Friedrich Naumann Stiftung in Berlin (called the Berliner Mittagsdebatte) in Paris by the Institut Français des Relations Internationales and the Lanesborough Luncheons, held in an exclusive London hotel.[8] It is known that the London luncheons were funded by Japan Tobacco International, the Geneva based firm. It also appears that the four series of events were connected in the sense that the lobbyists concerned appeared to be suggesting that they were events which they had organised. At the end of the briefing paper they give examples of 'host personailities and speakers' and note that 'complete personality lists and clipping books available on request'. In addition, Adam Bryan-Brown a Geneva based Japan Tobacco executive and lobbyist has referred to the 'Freedoms Program' run by Japan Tobacco International which involved the Lanesborough Luncheons 'and conferences in Brussels, Berlin and Paris'.[9] Ths suggests that tobacco money has gone to think tanks in Brussels, Berlin and Paris. None of the three think tanks listed above has admitted receiving funding from Japan Tobacco, despite the claim by JTI that it was the 'acknowledged sponsor' of these events.[9]

The lobbyists Edouard Peter and Michael McKay of Jedco Conseil (part of the Advisio International group) referred to these events as examples of a 'platform and follow-through series' which can help in 'conditioning public debate'.[8] The strategy recommended is

First, elevate the issue as high up the scale of logic, objectivity and social relevance as possible: It is not about this or that product, it is the boundaries to freedom of commerce... For example, practically all products may have negative health consequences, yet there is the broader issue of personal choice that needs to be balanced with an inclination to regulate. The freedom for adults to make their good or bad choices attracts influential audiences who otherwise may have no particular interest in the particular products.

Second, have a prestigious and credible third party assume the public debate on your behalf. The corporation doesn’t hide, yet its spokespersons never take the front of the stage in the public debate. Wherever possible, the third party is an independent institution, a recognized platform for objective debate among experts.

Bringing these two conditions together requires enormous tact, long-standing networks of relations at the highest levels and the ability to behave in a neutral fashion as a bridge between academic, political, media and commercial thought processes. The latter often disqualifies large, well-known consultancies. That is why this approach is not applied more often. Or if it is, can’t attract attention to itself and risk self-defeat.[8]

Centre for the New Europe