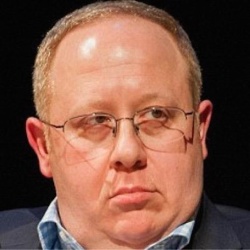 Stephen Pollard is the editor of the Jewish Chronicle, a senior fellow at the Centre for the New Europe in Brussels and at Civitas: The Institute for the Study of Civil Society in London as well as being chair of the Neocon connected European Institute for the Study of Contemporary Antisemitism and a signatory of the Statement of Principles of the neoconservative Henry Jackson Society. He is a supporter of the European Union. Pollard is also a political columnist who writes for most British newspapers, and regularly in The Times, the Independent, the Sunday Telegraph and Wall Street Journal Europe. He is a member of the advisory board of Pfizer Europe.[1]

From 1995-98 he was Head of Research at the Social Market Foundation, and from 1992-95 Research Director at the Fabian Society. His biography of the former Home Secretary, David Blunkett, was published in 2004. From 1998-2000 he was a columnist and Chief Leader Writer on The Daily Express; He is co-author, with Andrew Adonis, of A Class Act: The Myth of Britain's Classless Society, [2]and is also the author of numerous pamphlets and monographs, including The Market and Clause IV, Towards a More Cooperative Society: Ideas on the Future of the British Labour Movement and Independent Health Care, A Question of Choice: Public Priorities for Health Care, Schools, Selection and the Left, and Israel, America and the Jews of the European Union. [3]

In the London Review Blog Eliot Weinberg has described Pollard as an 'anti-Muslim hatemonger',[4] much like Bruce Bawer whose latest book, Surrender: Appeasing Islam, Sacrificing Freedom, he reviewed in the New York Times Book Review on 26 July 2009.[5] Pollard began his review thus:

There is no more important issue facing the West than Islamism, Islamofascism or — to use yet another label — radical Islam. And there is no more necessary precondition to countering that threat than understanding it...But before we do any of that, we have to agree that the threat exists.

Pollard proceeds to accuse 'many liberals and others on the European left' of 'making common cause with radical Islam and then brazenly and bizarrely denying both the existence of that alliance and in fact the existence of any Islamist threat whatever'.[6] He acknowledges that he finds “Surrender” 'at times, hard going', but this is only in part 'because of the level of detail Bawer offers in support of his argument' and because 'Bawer is unquestionably correct, and that fact is quite simply ­terrifying'.[7]

On his blog, Pollard disparages both the NHS[8] and the Royal Mail[9], and speaks approvingly of private alternatives. After accusing the Guardian and other British critics of ignorance about the US healthcare system, Pollard writes:

The plain fact is that if you have a serious disease or need long term care, if you have the right coverage you are so much better off being treated in the US that the NHS is not even comparable.

Although he qualifies the statement by adding that the 'crucial words, of course, are "if you have the right coverage", and clearly the US system is not remotely a model to be followed', he adds:

But to leap from that to the conclusion that the NHS is 'better' is dangerously deluded. The NHS is a system designed for an era when food rationing was the norm, and is metaphorically, ideologically and financially bankrupt.[10]