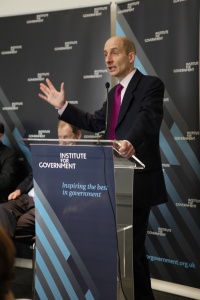 Andrew Adonis introduces the Institute for Government's Future of No 10 Communications event, 08 March 2011.

Andrew Adonis (Lord Adonis) is a Labour life peer, former journalist, educationalist and academic. He was education and constitution policy adviser at No.10 Downing Street from 1998 until 2005 under Tony Blair.

In 2005 he was raised to the peerage as Baron Adonis, of Camden Town in the London Borough of Camden. [1]

From 1991 to 1996 Adonis was an education and industry correspondent, and public policy editor at the Financial Times. In 1996, he moved to The Observer to work as a political columnist, leader writer and editor.[2]

He was a local Lib Dem councillor for Oxford City from 1987-91 and in 1994 was chosen as a Lib Dem parliamentary candidate for Westbury but resigned after 18 months. He joined the Labour Party in 1995.[2]

Adonis is opposed to the elitism of the 'Oxbridge' universities, although he himself studied History and Philosophy at Oxford University. He persuaded Tony Blair to bring in performance-related pay for teachers. He reportedly at one point had more control of education policy within the Labour Government than Ministers. He wrote a book, A Class Act, which calls for selection in schools. He wants the top universities to be allowed to charge extra fees and has openly encouraged their vice-chancellors to press for them.

Adonis lives in Islington, north London, and was one of the Governors of the troubled George Orwell School which changed its name and appointed a disastrous short-lived 'superhead'.