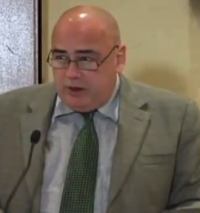 Bruce Bawer is an American conservative poet, literary critic and author who lives in Oslo, Norway. He has also had considerable influence on the counterjihad movement.

While Europe Slept - Europe being 'destroyed from within'

He is the author of several Islamophobic books, most notably While Europe Slept: How Radical Islam is Destroying the West from Within.[1] The book reportedly cites Eurabia conspiracy theorist Bat Ye'or approvingly.[2] It was nominated for the National Book Critics Circle Award for 2006 leading the president of the Circle’s board, John Freeman, to write on the organization’s blog (bookcriticscircle.blogspot.com):

I have never been more embarrassed by a choice than I have been with Bruce Bawer’s ‘While Europe Slept’... It’s hyperventilated rhetoric tips from actual critique into Islamophobia.[3]

Literary critic Eliot Weinberger has called Bawer an 'anti-Muslim hatemonger'[4] and described his work as 'racism as criticism'.[5]

In his new 2009 book Surrender, Bawer also accuses The New York Times for refusing to highlight the Islamist threat and attacks Tariq Ramadan, who according to Bawer is 'a habitual practitioner of the Islamic art of taqiyya — which essentially means saying one thing in Arabic and another thing in English or French.'[6]

The Left as 'Quislings'

In Bawer's 2012 book The New Quislings: How the International Left Used the Oslo Massacre to Silence Debate About Islam, Bawer used a quintessentially Norwegian reference point - (quisling, as a term for someone who collaborates with the enemy, came from Norwegian war-time leader Vidkun Quisling, who headed a domestic Nazi collaborationist regime during the Second World War) - to suggest that the comparative lack of Islamophobia on the left as compared to the right represented 'collaboration' with Islam, implicitly compared to fascism, a common counterjihad trope. Author Sindre Bangstad links this notion to similar ideas expressed about the left in the Eurabia conspiracy theory developed by Bat Ye'or.[7]

The manifesto of Islamophobic Norwegian mass murderer Ander Behring Breivik quoted Bawer on 22 occasions, though always in texts lifted from other writers.[8]

Author Sindre Bangstad writes that Oslo-based Bawer was, by his own account, in regular social and email contact with 'Fjordman' (Peder Jensen), the Norwegian writer most heavily cited in Breivik's manifesto, in the years leading up to Breivik's killing spree. He states that Bawer introduced Fjordman to Robert Spencer and Bat Ye'or at a conference commemorating the murdered Dutch populist Pim Fortuyn in the Hague in 2006.[9]

On multiculturalism, immigration and deportation

Along with a laudatory review by neoconservative commentator Stephen Pollard, the New York Times published an excerpt from Bawer's book Surrender: Appeasing Islam, Sacrificing Freedom, which included the following passage:

The pernicious doctrine of multiculturalism, which teaches free people to belittle their own liberties while bending their knees to tyrants, and which, as we shall see, has proven to be so useful to the new brand of cultural jihadists that it might have been invented by Osama bin Laden himself.[10]

Bawer has suggested that European officials, who are 'in a position to deport planeloads of people everyday', 'could start rescuing Europe tomorrow'.[11]

Support for the Progress Party

According to Sindre Bangstad, Bawer is a supporter of the right-wing Norwegian Progress Party.[12]