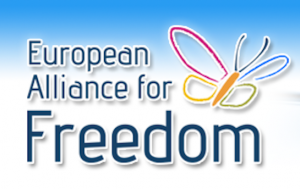 The Alliance describes its role as follows:

European Freedom Alliance is an organization based in Switzerland devoted to building alliances throughout Europe between individuals and communities who recognize the threats to freedom and Western values represented by the growth of fascist ideologies and the application of anti-Western religious doctrine. Its programs include an annual international conference addressing the social and cultural problems of Europe; the establishment of an international legal task force to represent European victims of terror and cultural intimidation and a program to encourage investigative and scholarly research into the origins of Eurabian ideology and its application in modern Europe.[1]

The American Freedom Alliance hosted the launch of the European Freedom Alliance along with that of the Institute for Eurabian Studies on 13 February 2008. The event featured presentations by Dr. John Eibner and Bat Ye'or and a telecast address from Marcello Pera.[2]

The Alliance held its first conference in Rome on 13-14 March 2008, in conjunction with the European University of Rome and the Lepanto Foundation.[3]

A conference entitled The Politicization of Human Rights and International Law is due to be held in London in March, 2009. The event will be co-ordinated by Avi Davis.[4]