Difference between revisions of "Democracy and Security International Conference" 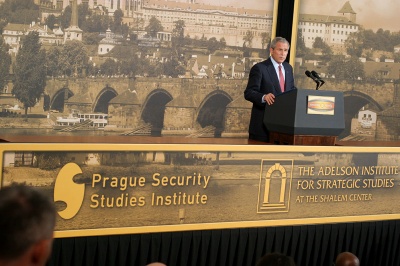 The Democracy & Security International Conference also known as the “Democracy and Security: Core Values and Sound Policies” conference was held in Prague on the 5-6th of June, overlapping the 2007 G8 summit in Heiligendamm.[1] The event, dubbed the 'Neoconservative International'[2] was organized by the Prague based Prague Security Studies Institute, the Adelson Institute for Strategic Studies at the Shalem Center in Jerusalem and Jose Maria Aznar's Madrid based Foundation for Social Analysis and Studies (FAES).

The aim of the conference was summed up in a background paper by Marc F. Plattner, that argued “building a world of free and democratic states should be our long-term goal”. The world view conveyed by the paper was one where “Increasingly the world is divided between liberal democracies and regimes that are tyrannical”. These tyrannical regimes represent a “growing security threat”, and they are “drawn together” by a “common fear and hatred of liberal democracy”. The hostile regimes “Support terrorism and threaten not only to acquire but to use nuclear weapons”. The regimes themselves were described as comprising of “The unholy trinity of Ahmadinejad, Chavez and Lukashenka”[3].

According to the Wall Street Journal it was the personal intercession of Natan Sharansky which persuaded George W. Bush to attend in spite of the objections of the State Department.[4] Sharansky stated at the conference "In today's world of confrontation, there is no better weapon than the promotion of democracy," He argued for the importance of dialogue with dissidents and policy makers, saying "This conference gives those responsible for policy-making an important opportunity for direct dialogue with the dissidents themselves."[5]

Looking at the conference agenda and the list of attendees (below), the neoconservative credentials of the conference are easily inferred. The subjects discussed focus on expediting political change in selected countries: Mynamar, Cuba, Iran, Belarus. Venezuela were also singled out for criticism in the background paper of the conference”. [6]. The potential for dissidents to achieve political change in these countries was a key issue for discussion at the conference. The role of central european states in EU-Russian relations was also discussed, with the conference being underwritten by NATO, these discussions are likely to be centred round the planned U.S. missile defence system which is planned to based in Poland and have a radar base in the Czech republic[7]