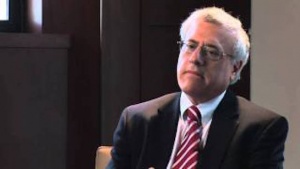 Harold Rhode is a Foreign Affairs Specialist in the Office of Net Assessment, Office of the Secretary of Defense.[1]

According to Jason Vest's September 2, 2002, article "The Men From JINSA and CSP," Harold Rhode and Andrew Marshall, from the Pentagon's Office of Net Assessment, "actively tinker with ways to re-engineer both the Iranian and Saudi Arabian governments."

"Called in to help organize the Iraq war-planning team was a longtime Pentagon official, Harold Rhode, a specialist on Islam who speaks Hebrew, Arabic, Turkish, and Persian (Parsi/Farsi). Though Douglas Feith would not be officially confirmed until July 2001, career military and civilian officials in NESA began to watch his office with concern after Rhode set up shop in Feith's office in early January. Rhode, seen by many veteran staffers as an ideological gadfly, was officially assigned to the Pentagon's Office of Net Assessment, an in-house Pentagon think tank headed by fellow neocon Andrew Marshall. Rhode helped Feith lay down the law about the department's new anti-Iraq, and broadly anti-Arab, orientation. In one telling incident, Rhode accosted and harangued a visiting senior Arab diplomat, telling him that there would be no 'bartering in the bazaar anymore.... You're going to have to sit up and pay attention when we say so.'

"Rhode refused to be interviewed for this story, saying cryptically, 'Those who speak, pay.'

"According to insiders, Rhode worked with Feith to purge career Defense officials who weren't sufficiently enthusiastic about the muscular anti-Iraq crusade that Paul D. Wolfowitz and Feith wanted. Rhode appeared to be 'pulling people out of nooks and crannies of the Defense Intelligence Agency and other places to replace us with,' says a former analyst. 'They wanted nothing to do with the professional staff. And they wanted us the fuck out of there.'

"The unofficial, off-site recruitment office for Feith and Rhode was the American Enterprise Institute, a right-wing think tank whose 12th-floor conference room in Washington is named for the dean of neoconservative defense strategists, the late Albert Wohlstetter, an influential RAND Corporation analyst and University of Chicago mathematician. Headquartered at AEI is Richard Perle, Wohlstetter's prize protege, the godfather of the AEI-Defense Department nexus of neoconservatives who was chairman of the Pentagon's influential Defense Policy Board. Rhode, along with Michael Rubin, a former AEI staffer who is also now at the Pentagon, was a ubiquitous presence at AEI conferences on Iraq over the past two years, and the two Pentagon officials seemed almost to be serving as stage managers for the AEI events, often sitting in the front row and speaking in stage whispers to panelists and AEI officials."