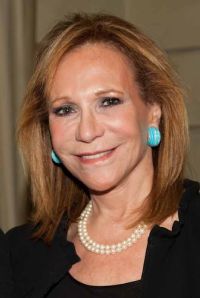 Nina Rosenwald is an influential neocon and operator in many activities of the pro-Israel lobby in the United States. Rosenwald was a delegate to the 1996 Democratic National Convention.

Max Blumenthal writes of her,

An heiress to the Sears Roebuck fortune, Rosenwald spreads her millions through the William Rosenwald Family Fund, a nonprofit foundation named for her father, a famed Jewish philanthropist who created the United Jewish Appeal in 1939. His daughter’s focus is more explicitly political. According to a report by the Center for American Progress titled “Fear Inc.,” Rosenwald and her sister Elizabeth Varet, who also directs the family foundation, have donated more than $2.8 million since 2000 to 'organizations that fan the flames of Islamophobia'.

Rosenwald is the founder and president of the neoconservative and anti-Muslim Gatestone Institute. She also sits on the executive committee of Daniel Pipes' think tank Middle East Forum [1] She is a former director and vice-president of the Zionist Organization of America.

A biography posted on the American Center for Democracy website circa 2006 included the following affiliations: [2]

Nina Rosenwald is co-chair of the Board of American Securities Holding Corporation, a private company overseeing investment activities in publicly-traded securities, as well as traditional investment and merchant banking. She is chairman of the Board of the Middle East Media and Research Institute and Vice President of the Jewish Institute for National Security Affairs. She also serves on the Board of Directors of the American Israel Public Affairs Committee, Human Rights in China, and Washington Institute for Near East Policy. She is a member of the Council on Foreign Relations, the Board of Regents for the Center for Security Policy, the Committee for Accuracy in Middle East Reporting in America, New York Academy of Sciences, United Jewish Appeal/Federation, New York Psychoanalytic Research and Development, Jerusalem Center for Public Affairs, and the Founders Association.

An 'editor's note' to Max Blumenthal's 2012 article in the Nation magazine however states that another biography on the Hudson Institute's website had listed 'several apparently false and out-of-date affiliations, among them a MEMRI chairmanship that never happened' and apologised for this error. [3]