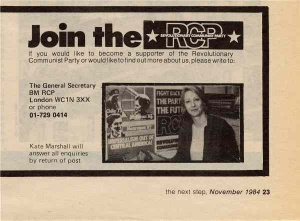 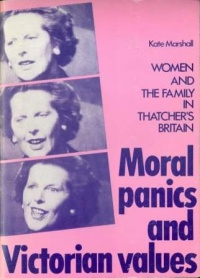 Cover of Kate Marshall Moral Panics and Victorian values, Junius Publications, 1985. Amongst its conclusions: 'The victorian values of rugged individualism correspond to the outlook of the ruling class' (p. 53)

She is reportedly a former leading member of the Revolutionary Communist Tendency and Revolutionary Communist Party in the 1970s and 1980s. According to sources quoted by leftist blogger Charlie Pottins, her real name was Katherine Barlow and while in the party adopted the 'party name' Kate Marshall. Later, on marriage, she became Kate Davies:

An ex-RCP comrade who did not get rid of his working class affinities to rise with the leaders remembers that Kate Davies did use to go by the name Kate Marshall, "though her actual name was Barlow, and she married a chap called John Davies, who was in the RCP. ...She became the General Secretary when the group decided to have such a position, but she drifted away from the RCP sometime in the mid-1980s, as far as I know out of politics altogether, as did her other half".[1]

Although she maintains social relationships with current associates of the LM network[2] Davies appears not to have been active in the LM network and seems to have ceased her involvement with the RCP at some point in the late 1980s.

From the early 1990s she pursued a career in housing and in the last few years has moved increasingly close to the Conservative movement. In 2008 she contributed blog entries to ConservativeHome[3] and she has chaired the 'Housing and Dependency Working Group' for the conservative think tank the Centre for Social Justice. She launched the report sitting alongside former Tory leader Iain Duncan Smith, evangelical Christian (and Tory Special Adviser) Philippa Stroud and the former head of Margaret Thatcher's Policy Unit in 1982-4, Ferdinand Mount.[4] She has also praised the housing policies of London Mayor Boris Johnson noting especially the emphasis on home ownership.[5] 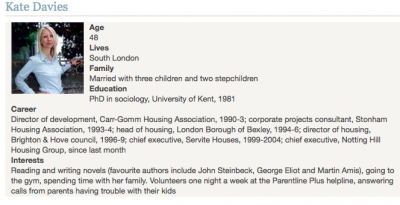 Katherine Barlow was appointed Director and Secretary, of Junius Publications in November 1977, giving her occupation as 'Housewife' and an address in New Cross, London.[7] On 4 May 1982 Anne Dickson was appointed as Secretary and Director (giving her occupation as 'Housewife') to replace Katherine Barlow who resigned on the same date.[8] Between 1977 and 1987 'Marshall' was a leading member of the RCP contributing three times to its short series of pamphlets and also to its theoretical journal Confrontation. In 1987 she stood as an electoral candidate for the RCP in the Greenwich (by-election 26th February 1987) securing 91 votes and coming last in a field of eight behind the Greens, the National Front and the British National Party.[9] 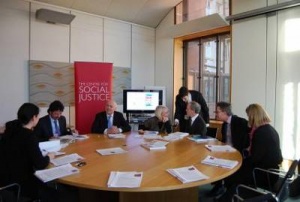 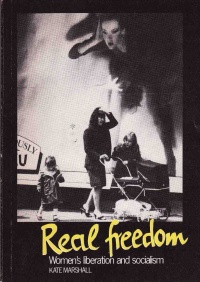 Cover of Kate Marshall, Real freedom, 1982. This concluded that: 'every blow struck today to keep a nursery open, to hold union meetings during hours of work, for pro rata wage rates for part timers or against legal discrimination of women will bring real freedom that much closer. Join us in the fight for a new world!' (p. 124)