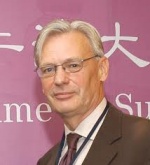 Alan Hudson (Date of Birth: 04/01/1951) is an academic and is associated with the libertarian anti-environmental LM network. He was a director of the RCP publications company Junius Publications from August 1990 until it was wound up in 2000,[1] though he only wrote for LM under his own name in December 1999/January 2000 just before it closed,[2] and wrote an introduction for a book published by Junius for Living Marxism in 1995.[3] The only other 'Alan' that wrote for Living Marxism before 1995 was Alan Harding who wrote mainly on Europe, sport and culture/the arts. Hudson also wrote on culture in 1995/6. Given this and the practice of using pseudonymous surnames, often starting with the same letter as the real name, it is possible that Harding was Hudson's nom de guerre in the RCP.

He has spoken at the Battle of Ideas, [4] an Institute of Ideas event, [5] the Manchester and Leeds Salons [6] [7] and for WORLDwrite. [8] He has written for Culture Wars, Channel Cyberia [9] and Spiked, [10] co-wrote a book with Dennis Hayes [11] and contributed to a book for Audacity. [12]. He was one of the first fifty signatories to the statement by the Academics for Academic Freedom. [13]

Hudson assisted Dennis Hayes in writing an updated report on Basildon. Hayes, 'was part of the team which first investigated the phenomenon of Basildon Man after the 1992 election.'[18] At the time this was reported in the press as having been written by Frank Furedi and Joan Hoey, both leading members of the Revolutionary Communist Party.[19]

In the 2001 report Hudson and co-author Dennis Hayes studied the alleged effect of Thatcherism on the working class by focussing on the allegedly key area of Basildon:

Remember Basildon man? Or his close neighbour, Essex man? Back in the late eighties and early nineties, these stereotypical figures were invoked whenever politicians or editorial writers wanted a shorthand way of representing the new face of the British working class. These shell-suited, vulgar, 'loadsamoney' characters were said to have forsaken their traditional allegiance to the cloth cap Labour party and to have found a new home in a Conservative party only too happy to champion individuality and self-betterment. They were hardly an admired cross-section of the population, but the notion that they were a new political entity was a powerful impetus to the creation of New Labour and the 'third way'. But sociologists Dennis Hayes and Alan Hudson were able to raise serious doubts about Basildon man's reality. In a 1992 survey, the year Basildon re -elected its Conservative MP, they found little of the brash aggressive materialism they had been led to expect.[20]

Hayes and Hudson then produced a second study with data collected in 1997. The study was published as a research report and by the New Labour think tank Demos:

Hayes and Hudson were sufficiently fascinated by the working class attitudes they unearthed to undertake a second, more extensive survey of the town in 1997. In their new book based on this work, The Mood of the Nation: Basildon Man Revisited (Demos), they provide further evidence for their original argument that Basildon Thatcherism was only skin deep.[20]