Global Futures is a registered charity associated with the libertarian anti-environmental LM network. Established in 1995 [1] [2] it published a report (in 1996) by LM network associate Alan Hudson and Dennis Hayes (Alan Hudson, Dennis Hayes and Toby Andrew, 1996, Working Lives in the 1990s: Preliminary findings of the Attitudes to Work Survey, London: Global Futures. ISBN 101901051005.[3]) and one book (Refusing to be Terrorised: Managing Risk) by LM network associate Frank Furedi in 2002[4] funded by Lloyds and the Association of Insurance and Risk Managers.[5] The original trustees were Michael Fitzpatrick, Dennis Hayes, Joan Hoey, Gavin Poynter and Helen Searls. [6] Its registered contact was Ellen Raphael. By the year 2002-3, according to the only annual report ever filed at the Charity Commission, the personnel were Phil Mullan (Chairman), Gavin Poynter and Daniel Ben-Ami (Trustees and 'Executive committee members') and project director Tracey Brown.[7]

Global Futures is registered with the Charity Commission no. 1048565. According to its entry on the Charity Commission website, its role is to support "research into work and family life, with a particular emphasis on the impact of new social trends on interpersonal relationships and informal bonds."[8] In 2011 Global Futures is run by three directors: Phil Mullan, Daniel Ben-Ami and Gavin Poynter.[9] All are associates on the LM network, with Mullan and Ben-Ami longtime core members of the network.

In 1999 Global Futures set up the Litigious Society Project.[5]

An internal memo of 1998 in the Tobacco Documents Library (http://legacy.library.ucsf.edu/) from Stephen Walzer of BAT Industries (British American Tobacco) discussed a letter that BAT received from Brown in her role at Global Futures, offering to help BAT in fighting the litigation launched against tobacco companies by people harmed by smoking. Walzer describes Brown as "a lecturer at the University of Kent who also works for Global Futures".[10] Walzer wrote that Brown was offering

to put together a work programme covering the sociology of litigation and 'the expansion of tortious duties'. By this she means the trend which we all recognise from the United States for people to be unwilling to take the consequences of their own actions. There is considerable sympathy for the position of the tobacco companies, and I believe that a co-operation with Global Futures will be helpful.[11]

Walzer explains that Brown was proposing

a study into the decline under the defence under English law that the plaintiff consents to risk, and it is also the intention to expand the study in the context of European Directives and the European Court of Justice. There is already a study being completed in relation to the US...[12]

Walzer added that "there is a cost attached to this work" and that "sponsorship would be welcome".[13]

The letter from Brown making the proposal is also available in the Tobacco Documents Library.[14]

In another letter retrieved from the Tobacco Documents Library written to an unknown recipient in 1999, Brown, again in her role at Global Futures, supplied her recipient (presumably someone in the tobacco industry) with press cuttings of the writings of Frank Furedi, Tony Eaton and Simon Wessely. Brown suggested that these would provide useful background material for a seminar called Litigating Britain. The aim of the seminar, Brown wrote, was "to allow a full and frank discussion about developments in compensation claiming, between people who have a professional interest in the issue."[15]

It is possible to trace a direct line of thought between Brown's offer to Big Tobacco and Sense About Science's work promoting nuclear power and genetically modified crops, which, like tobacco, are risky products requiring careful management of information of perception before people will accept them. Brown's proposed strategy regarding tobacco can be defined as:

Links with Sense About Science

The contact details at Sense about Science of its director, Tracey Brown, were given in October 2002 as: Email tbrown AT senseaboutscience.org, Telephone 01795 537322. The phone number of Sense About Science was also that of Global Futures (see screengrabs, right).[17][18][19][20] 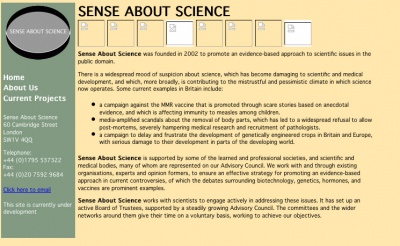 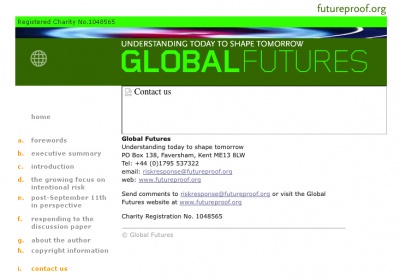 The only publication on Global Futures' website was one by Frank Furedi. Furedi, under the alias Frank Richards, was the chief theoretician of the Revolutionary Communist Party (RCP) - a faction that evolved into the publishers of the magazine Living Marxism (later LM). Brown worked with Furedi for a number of years and with Global Futures between its inception in 2002 and its demise in 2005.[21]

According to the Charity Commission, the administrative contact for Global Futures in 2002 was Ellen Raphael who, at the time Sense about Science was established, also worked for Regester Larkin[22] alongside former Monsanto PR man Harry Swan.[23]

Raphael also studied in Frank Furedi's department at the University of Kent, Canterbury.[24] Raphael has subsequently joined Brown at Sense about Science as Assistant Director. One of Global Futures' trustees was Philip Roy Mullan, aka Phil Mullan, aka Phil Murphy. Mullan, a central member of the RCP and a regular contributor to LM, is also the registrant of the Spiked website which was set up in 2000 by, LM's ex-editor Mick Hume. Another Global Futures' trustees was Michael Fitzpatrick (aka Mike Freeman), another RCP/LM stalwart. Fitzpatrick is also a trustee of Sense about Science.

Tracey Brown and Frank Furedi have worked with both LM and Spiked and have also both worked with the Institute of Ideas, which has published a book co-authored by Brown, Compensation Crazy: Do we Blame and Claim Too Much?[25] The Institute of Ideas was established by Claire Fox, LM's co-publisher. Like Spiked it arose from the ashes of LM.[26]

From the Internet archive circa 2002: