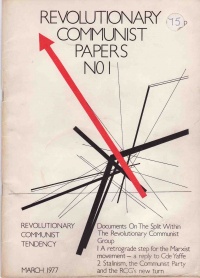 The first publication of the RCT, March 1977. 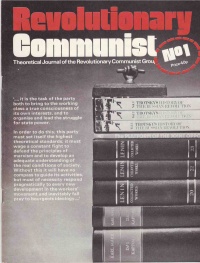 Issue 1 of the RCG publication Revolutionary Communist, featuring an early article by Frank Furedi under his cadre name of Frank Richards and a key document which the RCP continued to refer back to into the 1990s: 'Our tasks and methods'.

From the beginning RCT members used 'party names' in addition to their own names. Thus Frank Richards and Mike Freeman were cover names for Frank Furedi and Michael Fitzpatrick. The RCT also created a number of front groups, a pattern the RCP and later the LM Network would continue. Thus in 1977 and 1978 they had already formed the Smash the Prevention of Terrorism Act Campaign and Workers Against Racism, the latter of which carried on through the name change to the RCP. The former was replaced by the Irish Freedom Movement. 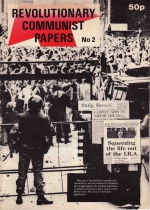 Split from the International Socialists

The RCT originated in a split in the Revolutionary Communist Group in November 1976. The RCG itself had been created following a split in the International Socialists (the forerunner of the Socialist Workers' Party) in spring 1973. The grouping, called the 'Revolutionary Oppostition' by itself[2] and the 'Right Opposition' by its opponents in the IS,[3] claimed that the IS had an 'economistic' perspective.[2] According to leading IS members the faction that became the RCT espoused a kind of 'paleo-Marxism' which displayed 'an obsession with the letter of the marxist classics which often lost sight of the method which informed these works'.[3]

According to the account of Alex Callinicos this faction:

were highly critical of mere involvement in the practical struggles of the day(the greatest Britain had seen since the 1920s) and argued that priority should be accorded to the formulation of the correct marxist programme; practically,they were highly suspicious of any attempt to modify the organisation's geographical structure by introducing factory branches and were afraid that an influx of workers into IS would dilute its politics(none too hot at the best of times, on their account). After an internal debate notable for its abstruseness (one of the main issues rested on the interpretation of Capital Volume 3 and the IS bulletin was for a time full of simultaneous equations) IS and the Right Opposition parted company.[3]

Formation of the RCG

Expelled from the RCG

The grouping that became the RCT was expelled from the RCG in November 1976 for opposing the attempt of the RCG to gain influence with the Communist Party of Great Britain and the Anti-Apartheid Movement. Furedi, in Dave Yaffe's words, 'began organising among a clique of middle-class members, and became their self-styled guru.'[4]

A right wing critic of the Left such as Blake Baker claims that the RCT was formed following the 'expulsion of a large minority of members in 1976 for attacking the Communist Party'.[5] Left critics, such as Denver Walker (a journalist at that time for the New Worker the paper of the New Communist Party), have a similar account: 'It was apparently their demand that the RCG publicly attack the African National Congress of South Africa... that led to the expulsion of the Tendency from its parent body'.[6] 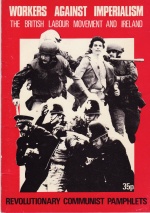 'Workers against imperialism : the British labour movement and Ireland'. Revolutionary Communist Tendency, May 1979 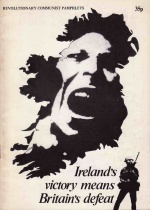 According to another account of its creation by John Sullivan a left critic of small left groups, but a lifelong socialist activist:

THE RCT was expelled from its parent, the RCG, for challenging that group’s grovelling before the Communist Party and the Anti-Apartheid Movement on its way towards becoming a consistent defender of anti-working-class regimes. The RCG was then conducting entry work in Anti-Apartheid. The people who became the RCT wanted to criticise the African National Congress.[7]

Elsewhere Sullivan had written that the falling out also had an economic dimension:

Yaffe’s plunge into full fledged Stalinism, combined with a disagreement over the mathematics in Capital with his chief lieutenant Frank Richards produced a split, [8] which eventually became the Revolutionary Communist Party (RCP).

Following the expulsion the expelled group seems to have split again around the time of the creation of the RCT with a small grouping called the Committee for a Communist Programme leaving according to some sources.[9]

Creation of the RCT

The RCT emerged early in 1977. The group that were expelled from the RCG in November 1976 issued a public statement under the name 'The members expelled by the MFPC of the RCG' on 25 November 1976.[10] One of the earliest public signs of the existence of a new group was an 'open letter' addressed on behalf of the 'Steering Committee, Revolutionary Communist Tendency', to all members of the RCG on 1 February 1977.[11] In March 1977 the newly formed RCT issued its first publication Documents On The Split Within The Revolutionary Communist Group inaugurating the series of Revolutionary Communist Papers. Later in the year they issued a key document setting out the importance of The struggle for a revolutionary propaganda group.[12]

By 1981 Sullivan put the strength of the RCT at 'around 70'[7], a figure with which Walker more or less concurs writing that the RCT 'perhaps' 60 members.[6] Sullivan wrote of the later development of the RCT/P:

The new group declared itself anti-Stalinist, and took several steps sideways in an attempt to differentiate its product... The group dropped Yaffe’s hostility to the working class and adopted an agnostic attitude to the historic divide between Stalinism and Trotskyism. At first sight it is a much less repellent group than its parent, but its essential eclecticism has landed it in some strange company. Opponents translate the initials RCP as Ray Chadburn Party, after the leader of Nottinghamshire NUM, because of the group’s support for a ballot during the miners’ strike.[8]

... its weekly journal The Next Step... is a kind of Left wing answer to Marxism Today, sharing that journal’s eclecticism. ... What then gives the RCP’s eclectic mishmash the appeal which made it the fastest growing group of the 1980s, with a dynamism notably absent from both the RCG and the Discussion Group? The answer is style. The group is part of the harder aggressive, post-punk move away from peace and love and the average RCPer looks very different from the grotty SWPers. They have been described as "the SWP with hair gel", and many a parent, pleased at the improvement in their child’s appearance, has welcomed the move from one to another.[8]

One early observer (in an article published in the January 1978 edition of Marxism Today) noted that at that stage the RCT were almost indistinguishable from the RCG from which they had split:

In recent months the RCG has not only suffered a breakaway—the Revolutionary Communist Tendency, or RCT—but also witnessed a further split within the breakaway—the Committee for a Communist Programme, or CCP. The rationale behind the splits does not seem to lie in any major disagreement on political orientation, but only over how sectarian the organisation should be towards other left groups, particularly the CPGB. For the purposes of this article, therefore, the three groups are treated as one. This is not unfair, for the three organisations share a common perspective on nearly all issues; for instance, both the RCG and the RCT publish a journal on Ireland called Hands off Ireland and the contents of the first issues of both journals are very nearly identical, the same signed articles appearing in both.[9]

This similarity did continue for some time, but the RCP did diverge in marked respects over the years. However, the two groups did produce journals with similar titles (Revolutionary Communist published by the RCG from January 1975 and Revolutionary Communist Papers and Revolutionary Communist Pamphlets, produced by the RCT from 1977) and it seems that the first edition of Hands off Ireland! was produced by the RCG in from December 1976, but that the nascent RCT did produce a version including some of the same articles. Though selling by February 1977 for half the price of the RCG version (10p), it was advertised in an early RCT open letter as a 'labour movement bulletin on Ireland written by expelled comrades of the RCG - new in the RCT.' It noted that the articles included 'Lessons of TOM' and 'British "peacekeeping" - British torture', both of which were published in the RCG version.[13][14] 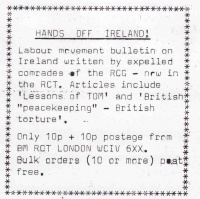 Transition from RCT to RCP. Appeal for funds for the RCP from the party theoretical journal Revolutionary Communist Papers, Issue 7, July 1981, p. 21.

The Smash the Prevention of Terrorism Act Campaign was created in late 1979 by the Revolutionary Communist Tendency. According to their own account: 'Towards the end of 1979 we decided to focus our activity in the labour movement on opposition to the PTA. We organised a national demonstration in November and the Smash the PTA Campaign was launched shortly afterwards.'[15]

Bring the War to Britain Event 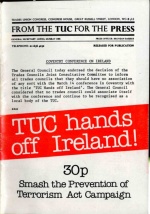 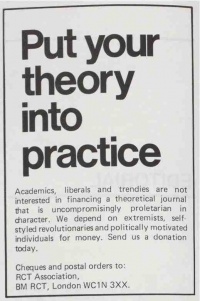 The RCT: not for ‘academics, liberals and trendies’, but ‘extremists, self-styled revolutionaries and politically motivated individuals’. Ad from Revolutionary Communist Papers, No. 8, September 1981, p.2

According to former RCP member James Heartfield, the secretary of Tameside trades council at the time Dave Hallsworth was at some point a member of the RCP (though it was still the RCT at the time and it is not clear if Hallsworth joined the RCP before or after the event)

Dave was secretary of the Tameside trades council at this time, committing it to a policy of supporting Irish freedom and a conference to discuss the Northern Ireland troubles. As a result, the TUC sent its future general secretary John Monks to disband the council.[16]

Imperialism in the Eighties conference, September 1980

The RCT created several strands of publication, one of which was the monthly 'review' of the RCT, titled The next step (without capitalisation), first published in December 1979. The next step would remain in publication through the following years as the paper (for some time a weekly paper) of the RCP. They also published two series of pamphlets, one of which was titled Revolutionary Communist Papers and was described as their 'theoretical journal'. The other was called Revolutionary Communist Pamphlets and ran to 13 issues until 1982, just after the creation of the RCP.

The publisher of all this material from late 1977 was a company called Junius Publications (Company No.: 01339999) which had a date of incorporation of 22 November 1977 (and was eventually dissolved on 25 January 2000 some four years after demise of the RCP).[17]

Non-series publications and other materials