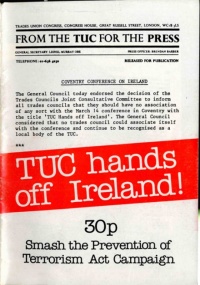 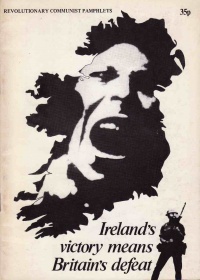 The Smash the Prevention of Terrorism Act Campaign was a front group created by the Revolutionary Communist Tendency in 1979. It was one of the vehicles for RCP work on Ireland until it was subsumed into the Irish Freedom Movement in February 1982. 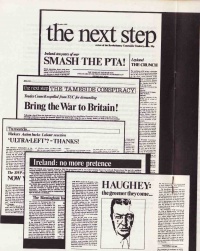 Collage from The next step from p. 12-13 of Ireland's Victory Means Britain's Defeat: the Role of the Labour Movement (Revolutionary Communist Pamphlets) Revolutionary Communist Tendency 1980 Junius Publications Ltd 24p. The top most image is from the first (November 1979) edition of The next step and shows the important role of Ireland in the development of the RCT/RCP 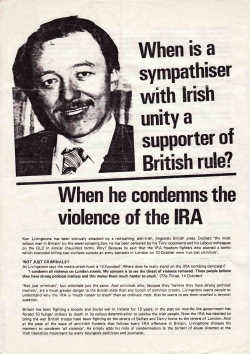 SPTAC Livingstone Leaflet: 'When is a sympathiser with Irish unity a supporter of British rule? When he condemns the violence of the IRA', October 1981 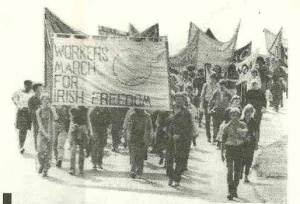 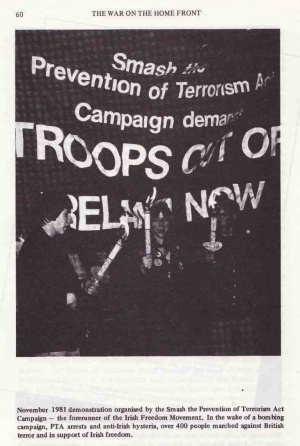 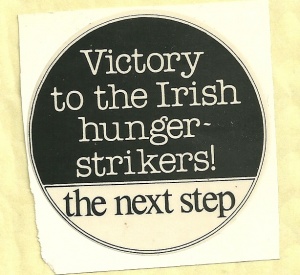 'Victory to the Irish hunger-strikers!', sticker produced by the RCP newspaper The next step, 1981.

The demonstration was held on 24 November 1979 and the campaign was launched via a leaflet given out to marchers advertising the 'first planning meeting' at Friends House near Euston in London on 13 December 1979 as well as the launch meeting in London planned for 1 February and its 'National conference' on 24 May 1980.[2] The leaflet argued that there were three good reasons why a campaign was needed. these were the 'defence of PTA victims', the need for up to date facts and figures' to be circulated in a 'news bulletin' and thirdly the need for 'anti-imperialist politics': 'workers will not oppose this Act consistently unless they are convinced of the need to support the war that is being waged against Britain.' 'Anyone', the text continues, 'who accepts the view that "terrorism" must be stopped - however well meaning or humane they might be - is in no position to fight the PTA.[2] This showed that the campaign was not conceived of as a broad campaign to oppose the PTA but as a vehicle to develop the RCT position. Of course the ultimate aim of that was to build the RCT on the basis of other left and Irish solidarity groups joining the SPTAC. This is strikingly shown in the section of the leaflet which lists the supporters of the march (including a range of left/socialist groups, the United Troops Out Movement, some union branches and both Provisional Sinn Fein and the Irish Republican Socialist Party). The leaflet urged all these groups to give their 'anti-imperialist politics some real content', by joining the SPTAC. Presumably the organisers were of the view that Sinn Fein and the IRSP had an anti-imperialist politics devoid of 'real content'.[2]

This sectarian approach was the culmination of a number of meetings held by the RCT in the run up to the march which resulted in clashes with another left group, the RCG, from which the RCT had been expelled some two years earlier.

Such conflicts continued between the two groups for some time. A report in the RCG Quartertly Hands Off Ireland! in April 1980 claimed that RCT members at an Irish solidarity picket of Bridewell prison in Liverpool 'vociferously attacked' those who started chanting 'Victory to the IRA!' and 'complained that the slogans should be restricted to ones the RCT could agree with'. Hands Off Ireland! continued sardonically, 'it can only be assumed therefore that the RCT does not wish to see the victory of the liberation forces in Ireland', and denounced what they called 'this petit-bourgeois anti-Republican grouping'.[3] 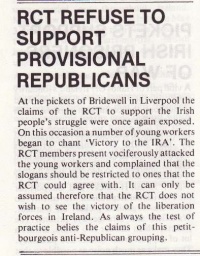 The SPTAC issued leaflets supporting the Bloody Sunday commemoration march called by Sinn Fein on 31 January 1982. The leaflet called on supporters to march on the SPTAC contingent. It claimed that mobiliising committees had been set up in North, South and East London as well as Coventry, Manchester, Leeds, Canterbury and Portsmouth, reinforcing the evidence that the RCT was, at that stage, mainly concentrated in London, Manchester, Coventry and Leeds.[7]