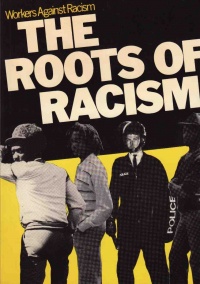 Workers Against Racism pamphlet written by Keith Tompson and published after what they describe as 'riots' in Handsworth, Brixton and Tottenham in October 1985.

Workers Against Racism is associated with the Revolutionary Communist Tendency/Revolutionary Communist Party, the forerunner of the libertarian anti-environmental LM network. It was led for a period by Keith Teare. Active in the 1980s, it is now defunct. Workers Against Racism was in existence from early 1979 via its initial grouping called East London Workers Against Racism, according to leading activist Keith Teare.[1] Its main periods of activity were in 1981 especially in London and Coventry and then in 1985 around the rebellions in the inner cities. A second wave of activity occurred in the early 1990s where WAR activists - predominantly in London - targeted racist violence, raise the issue of the treatment of refugees and developed their policy of targeting liberal and left anti racist work as opposed to taking on the far right such as the British National Party. 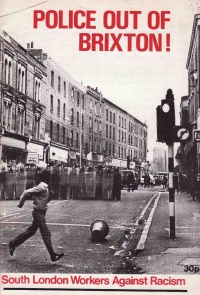 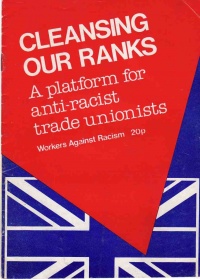 ELWAR was a radical anti-racist movement, which had been set up by a small Trotskyist group called the Revolutionary Communist Party, but which had become something of an institution in east London because of its willingness to take direct action against racists. It set up street patrols, ensured the physical protection of families under attack, and organized local meetings, often in people's front rooms, to win support for those facing harassment or worse. In the case of the Saddiques, 'direct action' meant staying in the house, physically confronting the youths whenever they gathered, and canvassing the local area, house by house, shop by shop, both to win support for the family's plight and to find out more about their tormentors. All of which explains why I spent much of 1984 not at University but camped out in a house in London's East End.[2]

The position of the RCP and WAR on racism and racist organisations evolved such that by the end of the Party and on into the LM network racism was an issue they mainly dealt with by either defending the rights of the far right to free speech or by attacking anti-racist organisations. Thus, writing, of the LM network post RCP Dave Renton, a former (brief) sympathiser, notes: 'Most of the former party fronts which the RCP had run continued: although some folded quicker than others. What was the point of Workers Against Racism, when the RCP was neither pro-worker nor anti-racism?'[3]

In an earlier post Renton had shared his memories of the RCP in Sheffield in 1995-8[4]:

I remember being in Sheffield in 1995-8, when the main activities of the group were to promote showings of such films as Leni Riefenstahl's Triumph of the Will. Leading BNP activist Mark Collett always boasts[5] that he joined the BNP, through the activities of one such RCP front, 'When I came to Leeds University I joined the Free Speech Society to fight against political correctness. Then a BNP speaker got expelled, which I thought was absurd. He invited me to a BNP meeting in Burnley and I felt right at home. They were my kind of people.' He made the same point at his recent trial.[6]

I remember organising various activities in Sheffield and Leeds in the same period, most of which were conducted around anti-militarist issues. A couple of free-speech film screenings in the Steel City were Romper Stomper (an anti-fascist film) and Birth of a Nation, which the narrow anti-fascists wanted to ban. These were both screened some time before 1995, if memory serves. I don't recall a Triumph of the Will showing. Meanwhile, Mark Collett, who comes from the same school catchment area as me but is way younger, was set to become a Leeds University alumnus in May 2002. That meant Collett missing out on punch-ups with my comrades by at least three years, as the RCP was dissolved in 1996.

Of course the point is that the dissolution of the RCP was accompanied by a series of 'continuity RCP' organisations, that can be characterised as the LM network. There seems to be little dispute that Collett was active in the Leeds Free Speech Society. The THES records him in April 2001, as a leading activist in the group when reporting attempts by the society to overturn Leeds 'No platform' for fascists policy:

Student leaders are worried that the hard right is gaining ground in universities after evidence of British nationalist groups moving in on several campuses. Leeds, Leicester, Derby and Nottingham universities are being targeted by racist groups such as the Patriotic Students' Association, Students for Britain and the National Student Front.

At Leeds University, a meeting of the Free Speech Society, led by rightwing activist Mark Collett, was cancelled after complaints from anti-Nazi groups. A university statement said: "As organisers of a potentially controversial meeting, the Free Speech Society has failed to give adequate notice so that... security arrangements can be put in place." The society campaigned for Leeds students' union to drop its "no platform for racists" policy but its motion was defeated.[8] 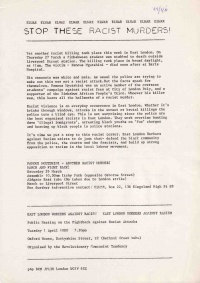 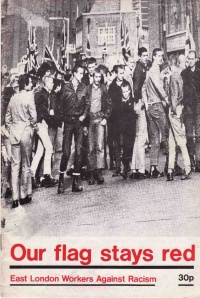 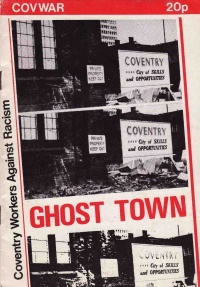 Workers Against Racism an RCT/RCP front group, published Ghost Town October 1981 some four months after the song of the same name was released by the coventry based group the Specials. 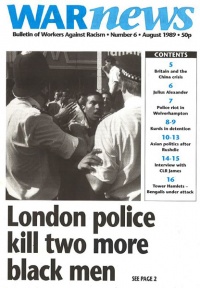