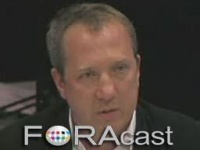 Thomas Deichmann (born 1962) is the founder and Editor in Chief of the bi-monthly German magazine NovoArgumente, published in Frankfurt.[1]

Formerly interested in Yugoslavian civil war, he has recently been writing mostly on modern biotechnology.[1]

Deichmann is associated with the libertarian and anti-environmental LM network. He is the editor of the German on line magazine NovoArgumente and has contributed to the London International Research Exchange, Institute of Ideas events and Spiked.

He has also co-authored a book on biotechnology with Thilo Spahl, Das Populäre Lexikon der Gentechnik: Überraschende Fakten von Allergie über Killerkartoffel bis Zelltherapie (The Popular Lexicon of Genetic Engineering: Surprising Facts, from Allergy and Killer Potatoes to Cell Therapy), which has been published by Novo.[1]

In April 2003 he was one of the speakers at a Genes and Society Festival in London organised by the the Institute of Ideas, where he was involved in debate on GM crops and the Third World.[2]

Deichmann has also contributed articles to Novo and Spiked on Percy Schmeiser, the Canadian farmer who has been in a long-running legal battle with Monsanto over patent issues and GM crops. In his 2002 Spiked piece, Deichmann chides the German media over what he claims is the inaccuracy of their reporting: "[T]here is a striking difference between the issues raised by the case and the way Schmeiser has been represented in sections of the German media - which indicates that, in the GM debate in Europe, scaremongering often has more purchase than science."[3]

In 1992, a photograph of Bosnian prisoners behind the wire of Trnopolje concentration camp made front-page news as it confirmed Serbian 'ethnic cleansing'. Later in February 1997 , Deichmann wrote an article on his theory that the footage of the Serb-run detention camp taken by a team from the British Independent Television News (ITN) was designed to make the place look like a Nazi-style extermination camp, claiming that it was fake, that in reality the place was a collection centre for refugees.[4]

LM magazine where Deichmann published his theory about the 'fake' footage was sued for libel by ITN. The case went against LM, and the managize was forced to close in March 2000.[5]