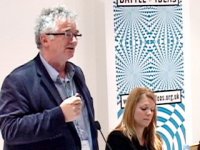 John Fitzpatrick is associated with the libertarian anti-environmental LM network, having been a candidate in the Hammersmith constituency for the RCP's Red Front in the 1987 General Election, active in the Irish Freedom Movement (circa 1991),[1] 'Living section' editor of Living Marxism (circa 1990-1992), published in [2] and being a shareholder of Spiked Ltd. [3]

He is a professor of law and director of the Kent Law Clinic at the University of Kent.[4][5] He gave the Institute of Ideas Christmas lecture 2009 on "Privacy, human rights and the Law on December 15, 2009[6] and has writen for Spiked[7] officiated for Debating Matters.[8]