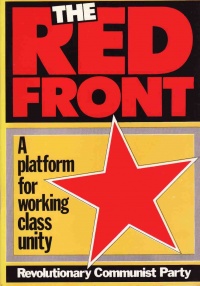 The Red Front was an ostensibly broad coalition led by the Revolutionary Communist Party which stood in the 1987 General Election and in some other byelections at the time, such as the Knowsley North by-election on 13 November 1986, in which the RCP candidate Dave Hallsworth gained 2.1% of the vote coming fourth after the conservatives with 644 votes.[1]

The Red Front was not widely supported on the left. It did however gain the support at least temporarily of two small factions. When it formed the Red Front 'like most fronts [it] had nothing behind [it] except for the tiny Revolutionary Democratic Group (RDG) and the Squaddists of Red Action. The front’s electoral programme consisted of a minimalist series of demands, which did not attack the capitalist system, nor advocate serious reforms'.[2]

Among its critics the Alliance for Worker's Liberty described their campaign as 'by far the most incredibly stupid prank of all', granting however that they were 'more consistent' than the SWP in that they 'opposed a Labour vote'. 'They stood 14 candidates (which must have cost a lot of money), most of whom got around 200 votes - except in Knowsley North where they got 538'.[3]