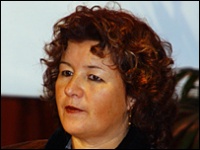 Ceri Dingle is associated with the libertarian anti-environmental LM network. She stood in Sheffield Central for the RCP's Red Front in the 1987 general election, has written for Living Marxism, Spiked and Culture Wars, [1]was co-director of educational consultancy ME-WE and documentary film company Chew on it Productions, is a director of WORLDwrite and a shareholder of Spiked Ltd, [2] [3] and has spoken at the Battle of Ideas. [4]

She initially studied at art school in Sheffield. She then studied Fine Art Communications for her degree in 1981, for an MSocSci in Cultural studies at Birmingham and received a Cert Ed (Post compulsory education) in 1999 from Canterbury Christ Church.In the past, she has organized international tours for young people.