Durodie at the Battle of Ideas speaking on: What are the barriers to science in the 21st century ? Institute of Ideas London, UK Oct 28th, 2007

Bill Durodié is a member of the advisory board of the Scientific Alliance and is part of the LM network, having contributed to Living Marxism, Audacity, the Institute of Ideas and Spiked and being a founder member of the Manifesto Club. He is described on the Spiked website as an "Advisor to the Prime Minister's Cabinet Office Strategy Unit study 'The Costs and Benefits of Genetically Modified (GM) Crops.'"[1] This study formed the economic strand that complemented the UK government's Public Debate on GM crops which culminated in 2003. 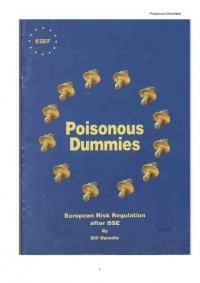 Durodié is the Senior Fellow coordinating the Health and Human Security research programme in the Centre for Non-Traditional Security (NTS) Studies of the S. Rajaratnam School of International Studies at the Nanyang Technological University, Singapore, where he teaches a course on 'The Politics of Risk' as part of the Masters programme. For three years prior to this he was a Senior Lecturer in Risk and Corporate Security at the Defence College of Management and Technology, Cranfield University, part of the Defence Academy of the United Kingdom. [2]

Durodié was educated at Imperial College London where he gained a BSc in Physics, the London School of Economics, where he got an MSc in Economics which takes two years where students 'first degree did not specialise in economics.'[3] and New College Oxford. In 2007 he was reportedly 'awarded a PhD by Public Works from Middlesex University'.[4]

Bill Durodié is Senior Lecturer in Risk and Corporate Security at Cranfield University. He was previously Director of the International Centre for Security Analysis, and Senior Research Fellow in the International Policy Institute, within the 5* Research Assessment Exercise rated War Studies Group of King's College London.
His main research interest is into the causes and consequences of our contemporary consciousness of risk. He is also interested in examining the erosion of expertise, the demoralisation of élites, the limitations of risk management, and the growing demand to engage the public in dialogue and decision-making in relation to science.
Bill was educated at Imperial College, the London School of Economics, and New College, Oxford. He is a Fellow of the Royal Society for the Arts (FRSA), an Associate Fellow of Chatham House (the Royal Institute of International Affairs), an Associate of the Royal College of Science (ARCS), a Member of the Society for Risk Analysis, and an Advisory Forum Member of the Scientific Alliance.
His work has appeared and been commented on in a wide range of publications, and he is regularly requested to provide expert commentary for television and radio broadcasts. Bill featured in the BAFTA award-winning BBC documentary series produced by Adam Curtis, The Power Of Nightmares: The Rise of the Politics of Fear.

Communicating the war on terror

Durodie is a Senior Research Fellow & Project Co-ordinator for the Domestic Management of Terrorist Attacks Programme, at the Centre for Defence Studies, which is part of the International Policy Institute at King's College London.[10] He also says he has, 'Worked as a European advisor within both the private and public sectors, including a secondment to the Government Office for London'.

On behalf of King's College London, Durodie organised the conference, "Communicating the War on Terror"[11], which took place at the Royal Institution in June 2003. Among those chairing sessions at the two-day event were Fiona Fox (director of the Science Media Centre) and Bruno Waterfield.[12]

Like Durodie, Fiona Fox and Bruno Waterfield have been contributors to the magazine LM, formerly Living Marxism . Among the conference speakers were Frank Furedi, Phil Hammond, Michael Fitzpatrick and Mick Hume, all of whom connect to LM and the Revolutionary Communist Party out of which it emerged. Another LM contributor, Ellen Raphael, the Assistant Director of Sense About Science, assisted Durodié with organising the event.

The fact that all these people had long term connections to each other and have been part of the same extreme political network does not appear to have been disclosed to those attending the conference. It can hardly be considered irrelevant given that the Revolutionary Communist Party, contributors to LM/Living Marxism , and the RCP's front group, the Irish Freedom Movement, which Fiona Fox at one time headed, all supported the 'armed struggle' in Northern Ireland, and refused to condemn any of the acts of terror of the IRA. They also, after the IRA announced their ceasefire, opposed the peace process and LM provided a platform for dissident republican views in articles written by Fox (under her alias Fiona Foster).

Durodie himself frequently cites the RCP's chief ideologist, Frank Furedi, in his publications, and has contributed to all the network's main platforms: LM, Spiked and the Institute of Ideas.

Many of Durodie's papers have been published by far-right think tanks, eg the Competitive Enterprise Institute (Poisonous Propaganda) and the European Science and Environment Forum (Poisonous Dummies), or by Living Marxism network connected groups, eg the Institute of Ideas (Can we trust the experts?) and Audacity.org (Society loses when the polluter is made to pay).