From Powerbase
(Redirected from National Association For Freedom)
Jump to: navigation, search

The Freedom Association, originally known as the National Association for Freedom, is a right-wing pressure group which was set up in the 1970s by a group of businessmen, aristocrats, military figures, journalists and politicians on the far right. In its early years it played a prominent role in disrupting campaigns for workers rights and racial equality led by trades unions and anti-apartheid campaigners. Its influence diminished somewhat after its far right agenda was taken up by the Thatcher government, but it remains a well known fringe group within the Conservative Party.

The two had a detailed discussion about the seriousness of Britain’s decline since the death of Winston Churchill. Lord de L’Isle had just received a letter from Michael Ivens [the director of the anti-union pressure group Aims of Industry], asking him to consider leading a new association pledged to support individual freedom and to resist ever Bigger Government. As a result of the long flight, Ross and Norris McWhirter were invited to Lord de L’Isle’s home at Penshurst Place in Kent for a further discussion. It was on the hottest day of the year, Thursday 12 June 1975. At a light lunch on a small round table that Lord de L’Isle had acquired at an auction at Chartwell, home of Sir Winston Churchill, plans were hatched to convene a meeting of fifty prominent people from politics, business, the armed services, the church and the professions at the Grosvenor House Hotel in London on Thursday 31 July.

These were the original council members of what was then called the National Association for Freedom. They included figures as varied as Field Marshal Sir Gerald Templer, the constitutional expert Lord Blake and the cricketer Alec Bedser. [2] 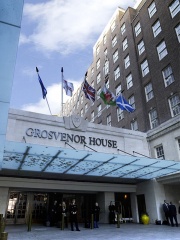 The Grosvenor House hotel on London's Park Lane. Here in one of London's most exclusive and wealthy neighbourhoods the original members of the Freedom Association met in July 1975

The group's other founding members included a number of radical right-wingers from journalism, academia and the Conservative Party. Michael Ivens was a founder member, as was Brian Crozier of the Institute for the Study of Conflict and his close associate Robert Moss, [3] who was appointed director of the Association. [4] Other founding members included John Braine, Professor D.R. Deman (professor of Land Economy at Cambridge), Sir John Foster, Jill Knight, David Mitchell, Nicholas Ridley Sir Frank Taylor, (managing director of Taylor Woodrow), Kenneth Watkins of Sheffield University and Peregrine Worsthorne. [5] 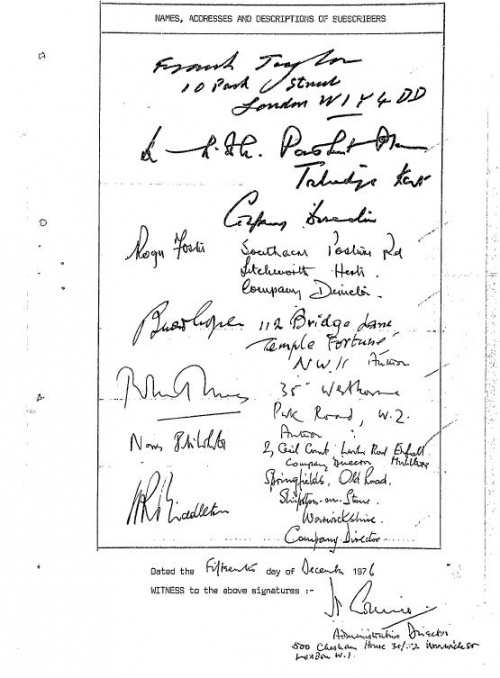 Companies House document showing the names of the National Association for Freedom's original subscribers when it was officially incorporated on 18 March 1977 (Click on the doc to see a higher definition).

Ross McWhirter was murdered by the IRA shortly before the planned launched which took place on 2 December 1975, with Norris McWhirter under protection by armed police. [6] Recalling the killing years later John Gouriet, another key member of the group, told the BBC: 'It was almost certainly a KGB crime because there were definite links between the IRA and the Soviet Union and I remain convinced today that that is what actually happened.' [7]

It absorbed a small pressure group the Middle Class Association, [8] which was led by the Conservative MP John Gorst.

When The Economist reported on the Association's progress in 1976 it stated that it was directed by Robert Moss and chaired by Viscount De L'Isle. Its governing council was said to include Norris McWhirter, and seven Conservative MPs including Winston Churchill, Jill Knight and Nicholas Ridley. At that time it had a full-time staff of ten at its London headquarters located 'near Shaftesbury Avenue'. [9] John Gouriet was reportedly administrative director of the group. [10]

It was incorporated as a limited company on 18 March 1977.

The Freedom Association sponsored legal actions to promote their right-wing agenda. They also published a fortnightly paper called The Free Nation. In 1976 The Economist reported that it was written 'using unpaid contributors who are often professional journalists -- of which 30,000 copies are printed at a non-union printing press "somewhere in the west of England". Half of the print order is, the NAF claims, sold at 15p a copy, mainly in the home counties and in the Manchester area, the remainder is distributed free.' [11]

Brian Crozier revealed in his memoir that founding members of the Freedom Association met with Margaret Thatcher on 9 March 1976. The meeting took place at Viscount De L'Isle's house in London's Eaton Square, and was attended by Brian Crozier, Norris McWhirter, John Gouriet and Robert Moss. [12] Brian Crozier recalls that:

Mrs Thatcher was listening and writing because I was telling her things nobody had yet mentioned to her, about Soviet subversion in the United Kingdom and worldwide, about the penetration of our trades unions and of the Labour Party, still in power at that time. [13]

According to the Guardian:

Naff's crowning glory was the battle over Grunwick, a photo processing lab in north London where an industrial dispute over union representation blew up into a cause célèbre in 1976. The dispute saw mass picketing, including Arthur Scargill's miners, and court actions by the company, which were financed by Naff. The organisation was widely credited with winning a small business victory against trade union might, and the affair prepared the ground for the Conservatives' anti-union legislation of the 1980s.[14]