Aims of Industry was founded in 1942 as an independent free enterprise corporate lobby group by business leaders in industry. It came into existence to combat nationalisation of key British industries such as sugar, iron and steel. It campaigned against the creation of the National Health Service in 1945. It was known as Aims for Freedom and Enterprise from 1975-78 and Aims from 1978-80. 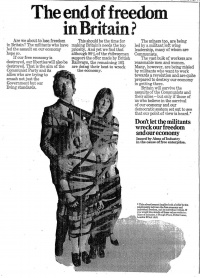 Although not directly involved in party politics, Aims of Industry is closely linked to the Conservative Party and the Freedom Association.

It makes an annual "National Free Enterprise Award", recipients of which have included F.A. Hayek, Margaret Thatcher and John Blundell.

According to the history of Aims published by the organisation in 1982 their objectives were: 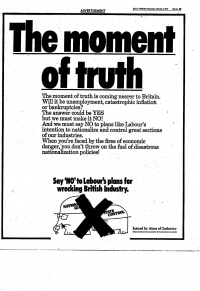 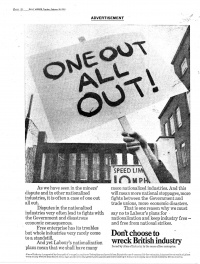 In its early years Aims was at the forefront of corporate campaigning against democratic decision making in Britain. When the Conservative Party split over Europe in the 1980s and 90s, some of Aims key leaders took the 'Eurosceptic' side, rendering them marginal in transnational business circles - so much so that the 'pro-european' lobby group Britain in Europe backed by Transnational business carried a profile of them:

Past funders are thought to have included Balfour Beatty [6] and Slough Estates [7] British American Tobacco supported Aims from 1949 until 1991.[8]

History’s most famous sugar lump was ‘Mr Cube’, an animated cartoon character born in July 1949 in a climate of grey austerity, rationing and contentious nationalisation proposals. Mr Cube became sugar’s brand image, the company logo of Tate & Lyle and a symbol of political embarrassment and electoral setback for the Labour government in the February 1950 General Election.

Peter Runge, the company’s campaign strategist, has recalled how ‘we were strongly advised to have a cartoon character who, if he caught the public’s imagination, could say the most outrageous things and get away with it, and who could act as a buffer between the public and Tate & Lyle’. Brandishing his sword of free enterprise and protected by his T&L shield, Mr Cube would ‘say sensible, cogent or outrageous things’ with appropriate grimaces and gesticulations, allowing Tates to ‘concentrate on attacking the Socialist policy in a somewhat more dignified manner’. [9]

Reds under the Bed, Aims of Industry (January 1974)