From Powerbase
(Redirected from John O’Sullivan)
Jump to: navigation, search 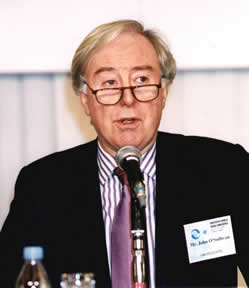 John O'Sullivan - Atlanticist and “a Thatcherite of the first hour.”

John O'Sullivan (born 25 April 1942) is an Anglo-American political commentator and journalist. He has held senior positions at a number of right-wing newspapers and policy journals and is known for his Atlanticism. He has described himself as “a Thatcherite of the first hour.” [1]

O'Sullivan is a senior fellow at the Hudson Institute. He has been editor-at-large of National Review for ten years and was the editor of the foreign policy quarterly, the The National Interest, from 2003 to 2005 and editor-in-chief of United Press International from 2000 to 2003. From 1998 to 2000 he was an editorial consultant to Hollinger International Inc. and a leading member of the team that created the Canadian National Post.

His previous posts have included special adviser to Margaret Thatcher when she was Prime Minister, associate editor of the The Times, assistant editor of the Daily Telegraph, and editor of Policy Review.

O’Sullivan has published articles in Insight (where he is on the Editorial Advisory Board along with other Hudson Institute members), Encounter and Quadrant (both of which were funded by the CIA via the Congress for Cultural Freedom), Commentary, Prospect, the New York Times, the Washington Post, Policy Review, the American Spectator, and the Spectator. He is represented by Benador Associates, where his section of the site contains many links to his writing, mostly from the National Review. The Benador site also states that O'Sullivan stood for Parliament as a Conservative in the 1970 General Election for Gateshead West, is on the Executive Advisory Board of the Margaret Thatcher Foundation which included the historian Norman Stone, former Conservative party treasurer Lord McAlpine and Lord Gowrie — the Margaret Thatcher Center was moved to the Heritage Foundation in 2005,[2] the Advisory Council of the Social Affairs Unit in London, and the Honorary Board of the Civic Institute in Prague. He was also a senior Fellow at the Nixon Center.[3]

There is a video of O'Sullivan speaking on his latest book at the Bratislava-based free-market promoters[4] the Conservative Institute of M. R. Štefánik which is funded by the Trust for Civil Society in Central & Eastern Europe which are openly funded by the American Embassy and by others including its founders, the Atlantic Philanthropies the Charles Stewart Mott Foundation the Ford Foundation the German Marshall Fund of the United States the Open Society Institute and the Rockefeller Brothers Fund.[5] Its trustees are mostly representatives from these foundations (including George Soros') and it also features Ivan Krastev, author of The Anti-American Century.[6] Other money has come in through USAID.[7] This is part of a growing move towards 'democracy promotion' and some of the institutions mentioned above can be seen in Andrew Green's Democracy and Donor Funding: Patterns and Trends.[8] 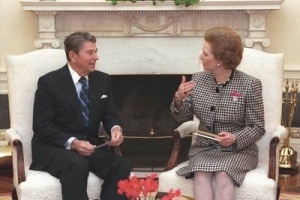 O'Sullivan has also written on The Strategic Defense Initiative (SDI) in his 2006 book The President, the Pope, and the Prime Minister, which casts all dissent towards 'Star wars' as Soviet propaganda, much in the manner of the Heritage funded Institute for European Defence and Strategic Studies of which he was a part, joining the Advisory Council in 1990. Previously he had been the editor of the Heritage Foundation's journal, Policy Review (from 1979 to 1983). In 2008 O'Sullivan was made Executive Editor of Radio Free Europe/Radio Liberty, based in their Prague office. At RFE/RL he got together with National Endowment for Democracy President, Carl Gershman to lead an RFE/RL briefing about U.S. efforts to promote democracy around the world, especially in the Middle East.[9]

It is some 32 years since I first visited the College for a meeting of the Mont Pelerin Society.[...] I was already “a Thatcherite of the first hour,” to use Gaullist terminology. Indeed, along with Ralph Harris, Arthur Seldon, Keith Joseph, and such distinguished alumni of that Hillsdale meeting as Madsen Pirie and Stuart Butler, who went on to found the Adam Smith Institute in London in the late 1970s—well, we all have a good claim to have been Thatcherites even before Lady Thatcher. Most of the intellectual groundwork for what became Thatcherism was done in places like the Institute of Economic Affairs, the Adam Smith Institute, the Center for Policy Studies, the Mont Pelerin Society—and Hillsdale College.[10] 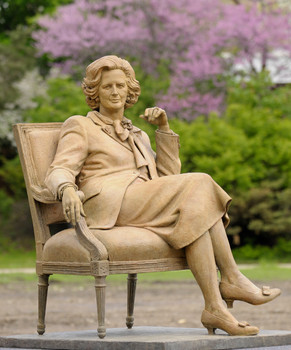 The speech goes on to outline Thatcher's installation of US missiles in the 1980s. O'Sullivan is also the Washington D.C. Representative of the Bruges group, set up in 1989 and whose inspiration was Thatcher's Bruges speech in September 1988, and O’Sullivan can be seen discussing 'Europe, America and Democracy' on their site.[11] His fellow IEDSS director Gerald Frost is also one of their supporters and Dr John Hulsman of the Heritage Foundation, has addressed the group.

A good example of O'Sullivan's commitment to the Atlanticist cause can be seen in the event 'Relaunching the Transatlantic Partnership: Common Goals and Shared Values' held at the Aldrovandi Palace Hotel in Rome from 2-4 October 2003.[12] This was intended as an international conference and organised by the Aspen Institute Italia and O'Sullivan's New Atlantic Initiative under the auspices of The Presidency of the Council of Ministers of Italy and co-sponsored by The Italian Ministry of Foreign Affairs, NATO Public Diplomacy Division and The American Embassy in Rome.

Max Blumenthal in a 2006 article in The Nation on the internecine fighting in the Washington Times suggests that the UK journalist Martin Walker is favoured by Arnaud De Borchgrave along with O'Sullivan to take over running the paper.[13] In his writing, Walker (Editor of United Press International) seems a cheerful exponent of the Israeli state and joins O'Sullivan on the advisory board of Insight.[14]