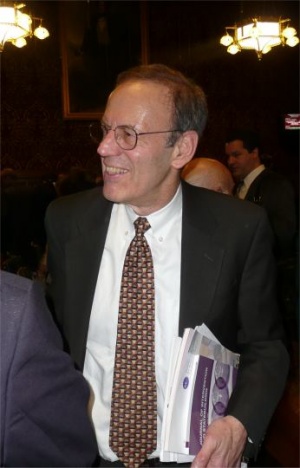 Carl Gershman is the President of the National Endowment for Democracy.

Gershman was the chair of Social Democrats USA from 1974 to 1980, and later an aide to Jeane Kirkpatrick when she was the U.S. ambassador to the United Nations. In 1984, he served as an adviser to the National Bipartisan Commission on Central America (the Kissinger Commission) established by President Reagan.[1]

Gershman comments about the need for a new US foreign policy:

"In a world of advanced communications and exploding knowledge, it is no longer possible to rely solely on force to promote stability and defend the national security. Persuasion is increasingly important and the United States must enhance its capacity to persuade by developing techniques for reaching people at many levels." Gershman went on to stress that "democracy" abroad, should be a major consideration for the United States, in its effort to "enhance its capacity to persuade around the world.[2]