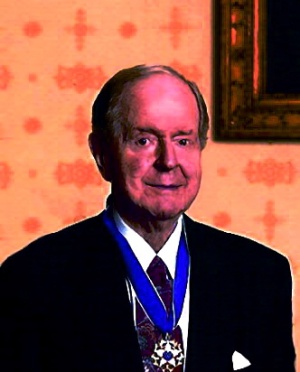 Robert Conquest was an early member of the Information Research Department, the covert propaganda outfit run by the British Foreign Office from 1948 to 1977.

Conquest was born in Malvern, Worcestershire, the son of an American businessman and an English mother. His father served in an ambulance unit with the French Army in World War I, winning a Croix de Guerre in 1916. Robert was educated at Winchester College, the University of Grenoble, and Magdalen College, Oxford, where he was an exhibitioner in modern history and took his bachelor's and master's degrees in Philosophy, Politics and Economics, and his doctorate in Soviet history. In 1994 he was elected a Fellow of the British Academy.

In 1937, after his year studying at the University of Grenoble and traveling in Bulgaria, Conquest returned to Oxford and joined the Communist Party. Fellow members included Denis Healey and Philip Toynbee. These were the years of the Popular Front against fascism. It was also the period of Stalin's purges, although few in the west were aware of this at the time. Conquest later made light of his commitment to Communism, but the journalist Christopher Hitchens, who knows Conquest well, says that he was a more serious Communist than he now admits.[1]

When World War II broke out, Conquest joined the Oxford and Buckinghamshire Light Infantry (enlisting was a sign that he was out of sympathy with the then-Communist Party's "anti-war" line), and became, like many intellectuals, an intelligence officer. That a known Communist should have been allowed to join the intelligence service seems extraordinary in retrospect (considering that the UK was much more on guard for this sort of thing than many other nations), but the Army seems to have taken the view that the political skills of people like Conquest outweighed any possible security risk. In 1940, he married Joan Watkins, with whom he had two sons. In 1942, he was posted to the School of Slavonic Studies, where he studied Bulgarian for four months.

In 1944, Conquest was posted to Bulgaria as a liaison officer to the Bulgarian forces fighting under Soviet command. There, he met Tatiana Mihailova, who later became his second wife. At the end of the war, he was transferred to the diplomatic service and became the press officer at the British embassy in Sofia, Bulgaria. He witnessed the gradual rise of Soviet communism in the country, becoming completely disillusioned with communist ideas in the process. He left Bulgaria in 1948, helping Tatiana escape the new regime. Back in London, he divorced his first wife and married Tatiana. This marriage later broke down when Tatiana was diagnosed with schizophrenia.

Conquest then joined the Foreign Office's Information Research Department (IRD), a covert anti-Communist propaganda unit. In 1956, Conquest left the IRD and became a freelance writer and historian. In 1962-63, he was literary editor of The Spectator, but resigned when he found it interfered with his historical writing. His first books, Power and Politics in the USSR and Soviet Deportation of Nationalities, were published in 1960. In addition to his scholarly work, Conquest was a major figure in a prominent literary movement in the UK known as "The Movement", which included Philip Larkin and Kingsley Amis. He also published a science fiction novel and the first of five anthologies of science fiction he co-edited with Amis. His other early works on the Soviet Union included Soviet Nationalities Policy in Practice, Industrial Workers in the USSR, Justice and the Legal System in the USSR and Agricultural Workers in the USSR.

In 1967 he was one of ten signatories of a letter to The Times backing U.S. Policies in Vietnam. The letter stated that much of the criticism “represents the impact of suspect information upon uncritical minds; and much of it, coming from conformist protestors.” It referred to “Anti-American propaganda" and added that, “The organisers of and participators in this vast, though ill-aimed, propaganda barrage should not deceive themselves into imagining that they have silence the voices of reason”. [2]

In 1981, Conquest moved to California to take up a post at the Hoover Institution at Stanford University, a traditional home of anti-Communist scholarship on Russia, and has lived there ever since.

Conquest is now senior research fellow and scholar-curator of the Russian and Commonwealth of Independent States Collection at the Hoover Institution. He is also an adjunct fellow of the Center for Strategic and International Studies in Washington, D.C., and a former research associate of Harvard University's Ukrainian Research Institute. He is a member of the board of the Institute for European Defence and Strategic Studies. He is a fellow of the British Interplanetary Society and a member of the Society for the Promotion of Roman Studies and the American Association for the Advancement of Slavic Studies.

Conquest has remained a British citizen and, in 1996, he was made a Companion of the Order of St Michael and St George. His other awards and honors include the Jefferson Lectureship in the Humanities, the Richard Weaver Award for Scholarly Letters and the Alexis de Tocqueville Award. Conquest has a substantial reputation as a poet. He has brought out six volumes of poetry and one of literary criticism, edited the seminal New Lines anthologies, and published a verse translation of Aleksandr Solzhenitsyn's epic Prussian Nights. He received the American Academy of Arts and Letters Award in 1997. He is a fellow of the Royal Society of Literature and the American Academy of Arts and Sciences. He is a frequent contributor to the New York Review of Books, the Times Literary Supplement and other journals.

In November 2005, Conquest was awarded the Presidential Medal of Freedom by George W. Bush.[4]