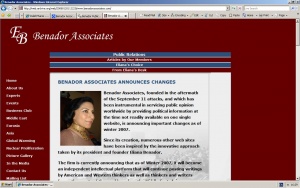 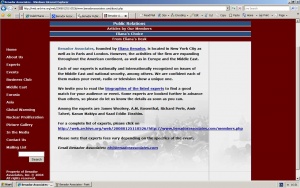 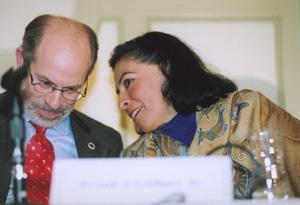 Eliana Benador and Frank Gaffney Jr at a Benador event 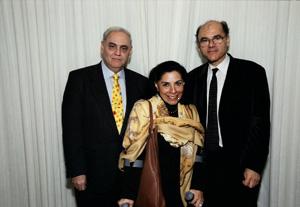 Benador Associates was a public relations firm based in Washington and New York that promoted right-wing writers and speakers. It was founded in the wake of the 9-11 attacks on New York and was 'intellectually conceived and financially funded exclusively by Eliana Benador'.[1]

'When historians look back on the United States war in Iraq, they will almost certainly be struck by how a small group of mainly neo-conservative analysts and activists outside the administration were able to shape the US media debate in ways that made the drive to war so much easier than it might have been… But historians would be negligent if they ignored the day-to-day work of one person who, as much as anyone outside the administration, made their media ubiquity possible. Meet Eleana Benador, the Peruvian-born publicist for Perle, Woolsey, Michael Ledeen, Frank Gaffney and a dozen other prominent neo-conservatives whose hawkish opinions proved very hard to avoid for anyone who watched news talk shows or read the op-ed pages of major newspapers over the past 20 months.'[2]

The firm changed its name in late 2007 to Benador Public Relations and the previous Benador Associates site is now closed down. There is a marked shift in the content of the new company away from the promotion of neoconservative politics and towards finance and real estate.[3]

While operating as Benador Associates the firm advertised prominent experts like James Woolsey, A.M. Rosenthal, Richard Perle, Amir Taheri, Kanan Makiya and Saad Eddin Ibrahim. They advertised their sevices by saying 'Each of our experts is nationally and internationally recognized on issues of the Middle East and national security'.[4]. Frank Gaffney has also appeared at Benador events.