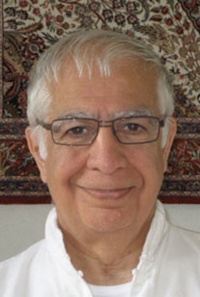 Amir Taheri is an Iranian-American journalist who was educated in Tehran, London and Paris.[1] A 'prominent Iranian journalist under the Shah', Taheri, according to a 2006 article in the Financial Times, 'now advocates regime change' in Iran.[2]

Taheri has been a columnist for Asharq Al-Awsat, 'a London-based publication linked to the Saudi royal family' [3], since 1987 [4], a regular contributor to the New York Post [5] and a member of the neoconservative PR agency Benador Associates until it reoriented its work towards financial advisory and real estate promotion in 2007. [6] He was a contributor to the German weekly Focus from 1993 to 2007. [7] [8]

Taheri is also chairman of the European board of governors of the controversial Gatestone Institute. The think tank has been described as one of America's hubs of Islamophobia.

According to his biography on Asharqu Al-Awsat, Taheri

was the executive editor-in-chief of the daily Kayhan in Iran from 1972 to 1979. He has worked at or written for innumerable publications, published eleven books, and has been a columnist for Asharq Al-Awsat since 1987. Mr. Taheri has won several prizes for his journalism, and in 2012 was named 'international journalist of the year by the British Society of Editors and the Foreign Press Association in the annual British Media Awards.

In 1989 he published Nest of Spies, a book about the fall of the Shah's regime and the Iranian Revolution. A professor of history and researcher at George Mason University, Shaul Bakhash, accused him in an investigative expose published in The New Republic of citing nonexistent sources and, when they did exist, of distorting them. [9]

In a 2005 New York Post column, Taheri identified Iran's UN ambassador, Javad Zarif, as one of the students involved in the illegal 1979 seizure of hostages at the US Embassy in Tehran. Dwight Simpson, a San Francisco State University professor, corrected him by writing "[t]his allegation is false," and "[o]n November 4, 1979 [the day of the seizure], Javad Zarif was in San Francisco. He was then a graduate student in the Department of International Relations of San Francisco State University. He was my student, and he served also as my teaching assistant". However, the Post never published its correction. [9]

'Jews to be forced to wear coloured badges in Iran' claim

In a 2006 article, the FT identified Amir Taheri as the source of stories that 'the Iranian parliament had passed a law that would require Jews, Christians and Zoroastrians to wear coloured badges to identify them as non-Muslims'.[10] The article was also published in the National Post of Canada, founded by neoconservative media mogul Conrad Black and now owned by the Asper family, who retracted it and apologised a few days later, when the story was proven false. [9]

The reports angered Iranian lawmakers, who said 'creativity was behind what they rejected as false and invented reports'.[10] Contacted by the FT, 'Mr Taheri told the FT he stood by his claim':

He said his sources were three opponents of the bill - which has not yet been approved by Iran's higher authorities. He cited them as saying a commission of experts was being appointed to work out implementation of the "Islamic identity" law, which could require provisions for identifying non-Muslims.[10]

The story about Jews, Christians and Zoroastrians being forced to wear badges in Iran was subsequently exposed as false, according to a report by IPS. The IPS report, by Jim Lobe, tells the story:

A story authored by a prominent U.S. neo-conservative regarding new legislation in Iran allegedly requiring Jews and other religious minorities to wear distinctive colour badges circulated around the world this weekend before it was exposed as false.

The article by a frequent contributor to the Wall Street Journal, Iranian-American Amir Taheri, was initially published in Friday's edition of Canada's National Post, which ran alongside the story a 1935 photograph of a Jewish businessman in Berlin with a yellow, six-pointed star sewn on his overcoat, as required by Nazi legislation at the time. The Post subsequently issued a retraction.

Taheri's story, however, was reprinted by the New York Post, which is owned by media baron Rupert Murdoch, and picked up by the Jerusalem Post, which also featured a photo of a yellow star from the Nazi era over a photo of Iranian President Mahmoud Ahmadinejad.

Another neo-conservative publication, the New York Sun, also noted the story Monday, claiming that the specific report that special badges were required by the legislation had been "incorrect". At the same time, however, the Sun quoted two Iranian-American foes of the Islamic Republic as suggesting that dress requirements for religious minorities were still being considered by Iran's ruling circles. It offered no evidence to support that assertion.[11]

Invited to the White House as an Iraq 'expert'

In May 2006, only a month after his news story was revealed as fake, Taheri was part of a group of "Iraq experts" invited to the White House to consult with George W. Bush on the situation there.

Taheri wrote an article for the New York Post just after the March 2016 terrorist attack in Brussels that killed 35 and injured 240. In it, he blamed the existence of a breeding-ground for jihadism on Belgian multicultural elites who refused to 'push' immigrants to integrate:

After the 14 July 2016 attacks in Nice, France, he wrote again, stating that '[the French] nation, perhaps the whole democratic portion of the globe, is at war, a war over two mutually exclusive visions of the future', the second being an 'Islamic' world-view, that he implied is lead by Iran. [13]

In an article published just after the San Bernardino attack in 2015, Taheri set out to pose the question: 'what is going on' with Islam? After praising the United States for acting in a benevolent and appeasing way towards 'Muslim nations' (in the form of financial aid, of granting refuge on their soil, of 'liberating' Muslims from dictatorial regimes, and so on), from the 18th century to the present, he claimed that 'no other nation has been a victim of vilification, demonization, and violence on the part of the Islamists as has the U.S.'. He brushes aside the justifications for hatred that 'leftists' have given, such as oil ("the U.S. was the only major power to have no state-owned oil company and thus never used its military clout to obtain a share of the Middle East's energy resources") or military occupations ("the U.S. was the only major power prepared to pack up and leave as soon as its hosts showed it the door").

Moreover, he blamed the 'politically correct crowd' (Western intellectuals and leaders) for making it impossible to criticise Islam, and for practicing 'Islamophilia', which to "treat Muslims as children whose feathers should not be ruffled" and to "sacrifice part of their own freedom in atonement of largely imaginary sins against Muslims in the colonial and imperialist era". On the contrary, he believes that Islam and Muslims badly need to be criticised, as their theology is centered around "death". Moreover, he argues that "many Muslims resent that kind of flattery, which takes them for idiots". [14]

In a 2016 article for the New York Post, Taheri praised Donald Trump's foreign policy plans. In it, he says: "Trump makes it clear that he wishes to de-Obamaize US foreign policy. He says he won’t go around the world apologizing to all and sundry for America’s alleged sins. Nor will he insist on flattering America’s Islamist enemies..". Moreover, he agrees, like Trump, that President Obama had "treated Israel horribly", and wished to see with Trump a change of policy in the opposite direction. He even praised his inexperience, by claiming: "because of his diplomatic inexperience, Trump states his objectives clearly where Obama conjures opacity". [15]