Break out of the grey: Election manifesto of the Revolutionary Communist Party 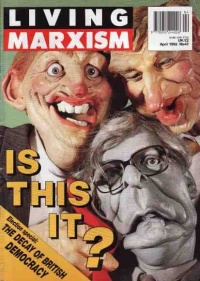 The last General Election for which the RCP put up candidates was in April 1992. In 1983 and 1987 the RCP manifestos was published as pamphlets by Junius Publications the party publishing company. In 1983 Preparing for Power ran to 53 pages and in 1987 the manifesto of The Red Front was 65 pages. By contrast the 1992 manifesto - Break out of the grey - was printed on a double sided A3 sheet with one side a poster featuring the candidates. When folded it formed eight pages of which the actual manifesto took up one and a half pages. It concluded by advising 'we make no promises to our voters'.[1] Eight candidates were offered for election including two in London and one each in Bristol, Birmingham, Glasgow, Oxford, Manchester and Sheffield. Those still close to the LM Network included Kenan Malik, Theresa Clifford, Keith Tompson and Helene Gold, the latter two of which were cadre names for Keith Teare and Helene Guldberg respectively.[1]

The RCP also stood another candidate as an independent under the banner of Workers Against Racism in Holborn and St Pancras, though he was not mentioned in the official manifesto: