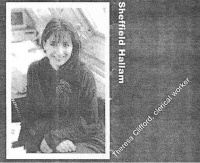 Theresa Clifford, RCP candidate for Sheffield Hallam in the 1992 General Election as featured in Break out of the grey: Election manifesto of the Revolutionary Communist Party

She is associated with the libertarian anti-environmental LM network through standing as a candidate for the RCP in the 1992 General Election in the Sheffield Hallam constituency, writing for LM,[2]speaking at the Battle of Ideas, [3] [4] and writing for Spiked. [5][6]

Clifford attended Canterbury Christ Church University and then worked, according to her linkedIn page as a 'Politics and Economics Lecturer' (January 1992 – June 1997 (5 years 6 months)) at various colleges and universities, though according to the RCP manifesto for the April 1992 General Election she was at that stage a 'clerical worker'. She then took up the role of Head of Production at Cyberia (July 1997 – December 1998) the firm founded by RCP stalwart Keith Teare.[1] She went on to lead sales and marketing for LM connected firms cScape/ClerksWell (November 2000 – February 2012).[1]