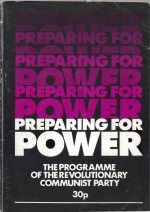 Preparing for Power was a pamphlet version of the RCP manifesto produced in July 1983 just after the June 1983 General Election and republished in a second and third edition in November 1983 and August 1984. The text first saw the light of day in the June 1983 'election special' issue of the party paper The next step.[1]

The party stood four candidates in the General Election in Birmingham, Sheffield, London and Ashton-under-Lyme.[1]

The title 'Preparing for Power' was also used for the annual party conference until at least 1990.