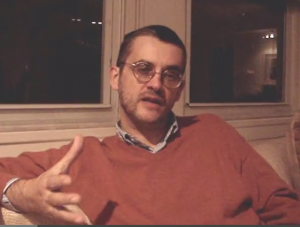 Paul Belien (Paul Beliën) is the founder and editor of The Brussels Journal, a key counterjihad movement blog published by the Society for the Advancement of Freedom in Europe (SAFE), a Swiss non-profit organisation.

Belien worked as a professional journalist in both Belgium and the Netherlands. In 1994 he founded the Brussels-based think tank Centre for the New Europe (CNE). His articles have appeared in the Wall Street Journal, The Spectator, The Independent and elsewhere.[1]

He holds a degree in law with specialization in social security law and European law (University of Ghent, Belgium) and a doctorate in international studies (University of Buckingham, UK).[2] In 2010, he was employed as 'personal assistant' by Dutch far-right MP Geert Wilders.[3]

He is also an adjunct fellow at the Hudson Institute and is married to Alexandra Colen, an MP in the far-right Belgian Vlaams Belang party.[4]

Belien promoted Bat Ye'or's 'Eurabia' thesis by providing leading proponents like Fjordman - one of the inspirations for Norwegian far-right terrorist Anders Behring Breivik - a platform on his Brussels Journal.[5].

In December 2006, the Middle East Forum appointed Belien as director of Islamist Watch.[1]

He has also been due to attend the UK and Scandinavia Counterjihad summit that same year but reportedly missed the event due to an airport strike.[6]

On 23 April 2009, the far-right populist German Pro Köln party stated on its website said that Belien would be attending[7] its 'anti-Islamisation' conference in Cologne on 8-10 May 2009.[8]

A number of Belien's articles have been published by the New York-based Gatestone Institute, which also publishes the work of anti-Islam activists Robert Spencer and Geert Wilders, among other.[9] His profile on the Gatestone website claims that he is 'a scholar on Europe, the European Commission and an adviser to European governments.'[10] These appear to be cross-posts from the Brussels Journal; the last of which was dated 2010.