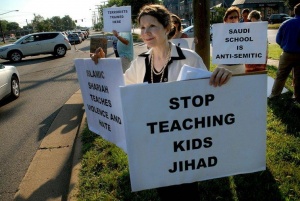 Christine Brim at a protest at the Islamic Saudi Academy in Washington. [1]

Christine Brim is the former senior vice president for policy and programme management and former COO at the Center for Security Policy (CSP). She is also executive director for the Victory Coalition Fund, 'an incubator for new projects working against Islamism'. Before joining CSP, Brim was a senior associate at the Lexington Institute and the Center for Vigilant Freedom. She received her MBA from George Mason University.[2]

The website of the Center for Vigilant Freedom (which now redirects to the rebranded International Civil Liberties Alliance) was registered to Brim, who gave an email address at the Envoy Group, a private company based in Brim's town of Fairfax, Virginia. [3]

In a November 2007 article, Brim commented on a Haaretz article about Jewish support for Jean-Marie Le Pen. She noted that the Center for Vigilant Freedom had not invited Le Pen to the recent CounterJihad conference, because of his 'current and past positions on Israel, the Holocaust and anti-semitism'.

We suggest looking for the possible movement of Le Pen’s political party Front National towards the center-right, as they may change their platform to pro-active support to improve the situations of European Jews and Israel. The same trend is happening in Austria, and with the BNP in the UK (also not invited and did not attend the conference). If such parties specifically state pro-Israel positions, and take real actions opposing anti-semitism and disavowing previous positions - and reach out to Jewish constituents and encourage Jewish participation in party positions - these are real actions to observe, and to approve. They have not done this yet - but are starting.[4]

According to the Jigsaw Contacts Database, Brim is the owner and CEO of the company. [5] According to Zoom Information Inc, the President of Envoy Group is/was Dr. Thomas Blau (the information is current as of 30 May 2005). The contact details given for Blau included a webpage of the now defunct International Commerce and Policy Program at George Mason University. [6]

As of June 2000, the company's website described Brim as a specialist in information technology:

Christine Brim provides expertise in Web strategy, networking technologies, knowledge based systems, distance education, telecommunications, marketing and sales automation, and ROI analysis for intranets/extranets. She has consulted on intranet management and planning for state, regional and local government agencies. She previously was a manager at AT&T and Computer Sciences Corporation. In addition to an MBA, she is an IAKE certified knowledge engineer.[7]

By December 2002 she was listed as the Envoy Group's president on the company's website, with Blau becoming research director.[8]

In March 2007, the Southside Messenger reported on Brim's role in a protest against the naming of a street in Virginia after a local Muslim leader:

Interestingly, ALL of the complaints regarding our coverage of Gilani Lane have come from out of the Southside Virginia area. Those that were not anonymous came from Fairfax, Virginia to California. Many of these are from a group calling themselves the 910 Group whose executive director is Christine Brim.

The ones that actually have content instead of just insults demand the answers to questions. Most say, "Why don't you believe Christine?" Why didn't you print ALL of the information Christine sent you?"

Our response to these "Christineeys" is " Why should your Christine be considered a reliable source? The links she sent do not prove Sheikh Gilani is a terrorist.

They only prove Gilani was listed on "patterns of global terrorism" report from 1995 to 1999. They prove he was removed from this list in 2002. They proved "Jamaat ul-Fuqua has never been designated as a Foreign Terrorist Organization." They prove a group of Muslims in Colorado were terrorists and criminals in the 1980's. These men were arrested, convicted and sentenced to prison. They emphatically do not prove a terrorist connection for those Muslims living in Red House.

As far as why we did not include ALL of Christine's information, Ms. Brim sent us several hundred pages of information, most of which had nothing to do with Sheikh Gilani or the Muslims living in Red House, Virginia. We included all of the relevant information and links.[10]

Baron Bodissey claimed in response to this article that "Christine" was not the executive director, but the operations director of the 910 Group.[11]

Gates of Vienna posted background materials compiled by Brim aimed at counteracting Muslim participation in the US Department of Justice's First Freedom Project.[12]

Brim spoke at the United American Committee's second "Rally Against Islamofascism Day" at Ground Zero in New York on 31 March 2007.[13] Her speech read in part:

I’m with Vigilant Freedom, home of the citizens network 910 Group — members in 41 states and over 20 countries, working to protect liberty, oppose sharia and counter jihad — vigilantfreedom.org. You’ve come here today because you are vigilant in defending our freedoms, and I want you to know that groups around the world are working for those same goals, against Islamist Imperialism in Europe, Asia, Africa and the Americas. Groups like Svenska Forum mot Islamisering in Sweden, Akte Islam and Ulfkotte’s new party in Germany, SIAD in Denmark, Liberté Vox in France — wear a blue scarf to support those resisting Islamification in France — Vlaams Blok in Belgium, in Southeast Asia Aburrahman Wahid and Nadhlatul Ulama in Indonesia, and here in the US we have our own interfaith groups working against Islamofascism, from the American Islamic Forum for Democracy to the signers of the Secular Islam Summit St. Petersburg declaration of March 5th.[14]

Brim was a delegate at the Counterjihad Zurich 2010, the fourth annual transnational conference of the counterjihad movement, held on 12-13 June.[15]