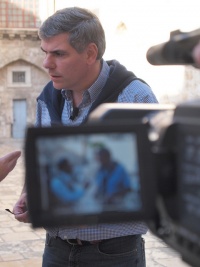 Following the emergency lockdown in Brussels a week after the November 2015 Paris attacks, Dewinter tweeted a series of anti-Islam comments (See images on the righthand side). 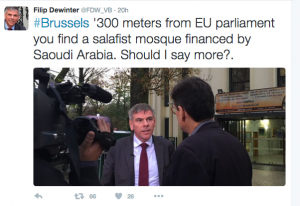 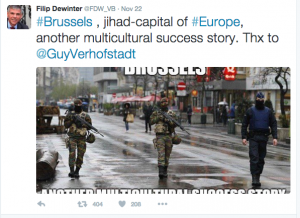 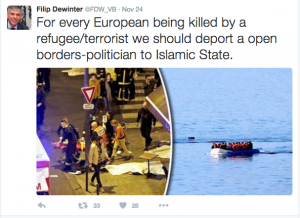 In an interview during a visit to Hungary he said:

"Migration is the trojan horse of terrorism" [2]

The counterjihad conference that touched all this controversy off -- since VB and SD reps attended it -- was openly pro-Israel, featuring an address by Andrew Bostom on antisemitism and another by the decidedly non-dhimmi Israeli politician Aryeh Eldad. There was nothing white supremacist or neo-Nazi about it, and in fact it seemed to herald a new phase of cooperation between European and American anti-jihadists, although its genuine work has been completely overwhelmed by the ensuing controversy.[4]

In March 2015 Dewinter led a Belgian parliamentary delegation on a visit to Damascus in Syria.

In early December 2015 Dewinter is due to speak at a PEGIDA conference in Dresden, Germany.

In 2012 his then 19-year-old daughter An-Sofie posed in a bikini and Islamic headdress in a 'shocking poster for the Vlaams Belang party’s campaign against Islamization and discrimination of women using the slogan: ‘Freedom or Islam? Dare to choose.’ This campaign was in collaboration with the organisation 'Vrouwen Tegen Islamisering' (ie, “Women against Islamization”). [5]