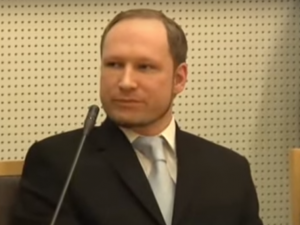 Breivik in court in 2012. He was convicted of mass murder and terrorism

Anders Behring Breivik was charged with the killing of 77 people in two attacks in Norway on 22 July 2011, involving a bombing in central Oslo and a massacre of youths at a youth camp on Utøya island.[1] He was convicted in August 2012 and received the maximum sentence of 21 years, though he is unlikely ever to be released from prison.[2]

Breivik had, in his youth, been a member of the populist right wing Norwegian Progress Party, before his views became even more hardline.[3][3]

Manifesto - 2083: A European Declaration of Independence 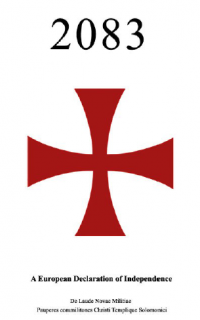 Cover page of Breivik's manifesto, which he signed with the pseudonym 'Andrew Berwick - London, 2011'

On the same day as his killing spree, Breivik posted a document entitled 2083: A European Declaration of Independence online and emailed it to contacts in the counterjihad movement. The title of the document, which was more than 1,500 pages long, was borrowed from an article by one of his main ideological influences, the Norwegian blogger Peder Jensen AKA Fjordman and Breivik used an Anglicized verion of his own name 'Andrew Berwick'. Large parts of the tract were directly copied from authors writing in the Eurabia genre, originally developed by Bat Ye'or.

The year 2083 will be the 400th anniversary of the 1683 Battle of Vienna, viewed in the counterjihad movement as a date on which Europe fought off Muslim invasion. Brevik is though to have used 2083 in the title as he hoped for a second triumph of Christian forces in European which would, in a civil war, drive out Islamic influence.[4]

An analysis by the Centre for American Progress[5] of the number of times Breivik cited various authors and anti-Islam websites in his manifesto revealed the following key influences on his ideas:

It has been noted that Breivik's contributions on Norwegian webiste Document.no make reference to what he calls 'the Vienna school of thought'. Three of the key writers he places in this 'school' are Robert Spencer, Bat Ye'or, and Peder Jensen AKA Fjordman. The name he gives the set of beliefs may also be a reference to the Gates of Vienna site, or the historical event to which it nods, the 1683 Battle of Vienna, often seen as a historically significant moment in terms of Europe's relationship with the Islamic world.[6]

Together with his manifesto, before carrying out the killings, Breivik posted a 12 minute video online, which he called 'Knights Templar 2083'. It features text and images gesturing towards the his ideas including how Muslims are waging what he called 'demographic jihad' and how a 'cultural Marxist' elite had forcefully imposed submission to 'political correctness' and acceptance of multiculturalism, in his eyes was tantamount to cultural/national suicide.

The video shows images and text about a number of historical figures associated with Crusades or deemed to have defended 'Western' culture, including Charles Martel, El Cid, Richard the Lionheart, Jacques de Molay and Vlad Tepes. It also made explicit references to what he called 'Islamic colonization', the 'Eurabian union' - a clear reference to Bat Ye'or's Eurabia conspiracy theory - and showed a image representing Islam as a Trojan horse.

A message urges viewer of the video to 'become a justiciar knight in your city' and promotes the idea of a 'conservative revolution' in which Islam will be banished from Europe. The video displays imagery bearing the words Knights Templar Europe (followed by 'Opposes all hate ideologies') and a badge with the letters KT, probably for Knights Templar, alongside the words 'Marxist Hunter', which Breivik appears to be wearing on the arm of a wetsuit he is showing wearing in a photograph at the end of the video in which he is pointing an automatic weapon.[7]

Online activity prior to 22/7 attacks

Breivik may have left two comments on the anti-Muslim Gates of Vienna blog, using the profile name year2183.[8]

In response to Suggestions for the future, posted by Fjordman on 29 September 2008, year2183 wrote a comment which read in part:

Why havent you or any of the other current authors on the Eurabia related issues/Islamisation of Europe (Fjordman, Spencer, Ye`or, Bostom etc.) brought up the “D” word? I assume because it is considered a fascist method in nature, which would undermine your/their work? Why would it undermine their efforts when it is the only rational conclusion, based on the above argument? As far as I know, it’s not illegal in Europe to suggest deportation as a future method when discussing future hypothetical World Orders (correct me if im wrong though, Im not 100% sure, lol)!?[9]

In response to another Fjordman post of 4 October 2008, year 2183 attacked writers he accused of profiteering from the anti-Islam movement:

I'm writing a book of my own, where one of the chapters are dedicated as a response to so called "revolutionary profiteers". There are around 10 ppl world wide writing about these subjects and the fact that most of them are trademarking everything, preventing distribution of full/partial content is very worrying... How can we, Europeans, rally a response to this devastating demographic warfare if all the intellectuals are doing everything they can to trademark and prevent the "truth" from being distributed?

I think its therefore absolutely fantastic that you are making it free to distribute/translate. Only the brave individuals that selflessly contribute will be remembered as heroes when we see a conclusion to this conflict in 50-150 years.[10]

Breivik was also a regular reader of the Norwegian nationalist site Document.no and often commented on articles.[6]

Brevik is known to have exchanged many emails with the blogger Peder Jensen, known as Fjordman between 2009 - 2010.[11]