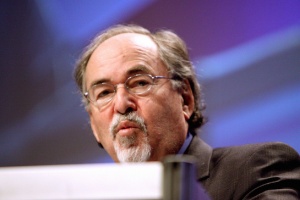 David Horowitz is the controversial founder and chief executive of the David Horowitz Freedom Center (DHFC), an umbrella organisation that operates a number of far-right websites and blogs and that publishes the online FrontPage Magazine, edited by Horowitz.

Horowitz is known for his shrill right-wing and anti-Islamic rhetoric and his organisation has given grants to various causes such as the anti-Islam Dutch politician's Geert Wilders PVV party.

Horowitz is a former hardline Marxist, who converted and is now staunchly anti-left. In an interview with Al Jazeera in 2008, he claimed that 'The American left wanted us to lose the Cold War with the Soviets and it wants us to lose the war on terror.' He started the Center for the Study of Popular Culture, a group meant 'to establish a conservative presence in Hollywood,' which was rebranded as the David Horowitz Freedom Center later on. [1]

In 2006, Horowitz wrote The Professors: The 101 Most Dangerous Academics in America, a book likening to the McCarthyist era. In the book he even defended the late Sen. Joseph McCarthy, saying, 'It is now known … that McCarthy underes­timated the extent of Soviet infiltration in American government and that virtually all individuals called before congressional committees were involved in a conspiratorial network controlled by the Kremlin.'

One of the professors spoken of in the book was widely respected Reconstruction scholar Eric Foner: 'Professor Foner participated in an anti-war "teach in" at Columbia University, where he invoked Communist Party icon Paul Robeson as a model of patriotism.' In his attack on Foner, Horowitz also noted that another professor at the teach-in had maligned the U.S. military and said he'd like 'to see a million Mogadishus.' [1]

The book was vehemently criticised by Free Exchange on Campus, a coalition of 10 influential groups including the American Association of University Professors, in a major study called Facts Count. The study concluded that 'Horowitz’s research is sloppy in the extreme' and rife with 'inaccuracies, distortions and manipulations of fact.' [1]

As for his claims concerning McCarthy, Facts Count, denied the fact that all or most of those who were called were involved in such a network. It is also untrue that McCarthy’s wild accusations were an underestimate.

It was revealed that Foner's praise of Robeson - who also has been honored on a U.S. stamp - was just to quote him saying 'The patriot is the person who is never satisfied with his country'. Horowitz also failed to mention that Foner had criticized his fellow professor's comment about the military on the very same day as the teach-in, calling it 'reprehensible.' [1]

Around Islam and Muslims

Around the Left and terrorism