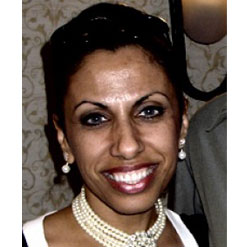 Brigitte Gabriel is president and founder of the right-wing American Congress for Truth. She has been described by The New York Times as a 'radical Islamophobe'. In her official biography she states the principal objective of her organization:

An Urgent Warning to the West
After the tragedy of September 11th, 2001 Ms. Gabriel founded American Congress for Truth.org a non profit organization dedicated to educating millions of uninformed Americans about the threat of radical Islam to world peace and national security.[1]

Brigitte Gabriel, a Lebanese Christian and Middle East correspondent, speaks of her experiences of losing her country of birth, Lebanon, to militant Muslim fundamentalists. In 2002, Ms. Gabriel founded American Congress for Truth (ACT) to provide information about the Middle East conflict and to give a platform to Americans, both Jews and Christians, who have lost their voice to political correctness. She speaks profoundly and passionately from the heart.[2]

According to Dan Alba, writing for Dissident Voice, Gabriel spoke at the Forces Staff College in Norfolk, Virginia, where the following exchange took place:

Brigitte Gabriel: You can not trust having a Muslim in office when he has to make a decision to either be loyal to the United States or be loyal to Islam.
Audience Member: Ma'am, thank you. I’d like to point out that I'm an American soldier, practicing Muslim, served the U.S. Army for the past 19 years very proudly [a rebuttal to your previous point]. ... Two questions. Are you a member of Hasbara Fellowship? [And if you are] does that, uh—
BG: What’s Hasbara Fellowship?
AM: A fellowship in Israel. [An] organization—
BG: No. No.[3]

In 2011, she expressed her views through the ACT For America website when claiming that '[t]ens of thousands of Islamic militants now reside in America, operating in sleeper cells, attending our colleges and universities,' and in that same year Gabriel was quoted in a New York Times article claiming that 'America has been infiltrated on all levels by radicals who wish to harm America. They [Islamist radicals] have infiltrated us at the CIA, at the FBI, at the Pentagon, at the State Department.' [6]

In her 2006 book Because They Hate: A Survivor of Islamic Terror Warns America, Gabriel's conclusion was that 'the Arab Muslim world, because of its religion and culture, is a natural threat to civilized people of the world.' [6]

Her latest book, They Must Be Stopped: Why We Must Defeat Radical Islam and How We Can Do It, argues that:

In September 2007 Gabriel was photographed with former Australian prime minister John Howard, during her trip to Australia where she was keynote speaker at a gala event for him. [8]

The JNF function at the Crown Casino in Howard's honour, where he was awarded the Jerusalem Prize for his 'friendship and commitment to Israel'. [9]

On September 27, 2014, she was invited to speak at the conservative Values Voter Summit. In her speech, she said that '180 million to 300 million' Muslims are 'radical Islamists who are willing to strap bombs on their bodies and walk into this room and blow us all up to smithereens.' But only a few days later, Peter Bergen, a terrorism expert with the New America think tank, published a survey that concluded there was a global total of 85,000 to 106,000 Muslims belonging to jihadist groups — so about 0.006625% of Muslims. [6]

Gabriel told Fox News presenter Sean Hannity on January 7th 2015 (right after the Charlie Hebdo Attacks), that although Muslims were invited to Europe to help it rebuild after World War II, they then 'started multiplying' whilst refusing to assimilate. Europe, she said, is 'paying the price' because it 'ignored the cancer growing in its body when it was at Stage Two.[..] Today, Europe and its cancer is at Stage Four.' Such a theory is extremely close to the 'Grand Replacement' theory coined by anti-Muslim Renaud Camus in France.

In the same vein, she claimed on Fox News’ January 2015, edition of The Kelly File that Muslims’ 'ideology … forbids them to assimilate' to European culture, also describing the Muslims who have come to Europe as 'not educated.'

She explicitly made references to the Eurabia theory in a radio interview on 'Breitbart News Saturday' in September 2015. She asserted that, because of Muslim immigration, 'Europe will no longer be Europe by 2050. Europe has already become Eurabia. Europe is Eurabia right now.' Speaking of the Syrian refugee crisis, she dismissed the idea that people at European borders were indeed fleeing war: 'They are people trying to suck off of the people in the West. They know they can get a free ticket for money.' [6]