From Powerbase
(Redirected from IDC Herzliya)
Jump to: navigation, search 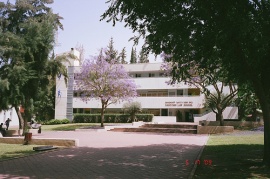 The Interdisciplinary Center (IDC) is a private (non-profit) college located in Herzliya, Israel. It has strong connections with the military and intelligence in Israel, particularly through:

IDC was founded in 1994 by Professor Uriel Reichman, a law professor formerly of Tel Aviv University who in 1990 had set up the Ramot Mishpat Law School - the first private college of its kind in Israel. In addition to Reichman, another figure who was important in the establishment of the college was Yoram Wind of the Wharton School of the University of Pennsyvania in the United States. Staff from the University of Pennsyvania provided visiting professors for IDC's business school in its first few years, [2] and also provided 12 of the 26 academics who made up IDC's International Advisory Board in 2001. [3]

IDC was established in a disused military camp in the town of Herzliya six miles north of Tel Aviv. Herzliya, which is named after the seminal Zionist intellectual Theodor Herzl, is home to Israel's largest high tech industrial park which housed companies such as Compaq, Motorola, National Semiconductors, and Sun Microsystems. A welcome message from Reichman which appeared on IDC's website in March 2001 read:

The summer of 1994 marked the opening of a unique academic institution in Israel. A group of professors, assembled in a vacated military camp in Herzliya, founded the first, non-profit, private university in Israel. The founders left tenured positions in leading Israeli and U.S. universities to embark on a challenging venture, intended to change the academic agenda of the country. [4]

IDC was originally known as the The Interdisciplinary Center for the Study of Business Law and Technology. Its School of Law opened in 1994, and its Business School in October 1995. [5]

Connections with Israeli military and intelligence

IDC gives special preference to military personnel wishing to study at the centre. In 1999 the Jerusalem Post wrote:

Some 15 percent of the spots in each class are set aside for graduates of elite army units whose matriculation exams may not be spectacular but who have shown significant leadership potential. Such applicants are invited for personal interviews, and former Mossad head Shabtai Shavit screens their personal military files to identify the most promising candidates. [6]

Similarly, in March 2001 the Radzyner School of Law stated on the IDC website:

The School of Law carefully selects students from a large pool of applicants. Scholastic ability is the main factor in this process, yet special credit is given to leadership qualities manifested by an outstanding military record in the Israel Defense Forces' elite units, and to candidates who have made an outstanding contribution to society. [7]

IDC founder Uriel Reichman told the Jerusalem Post in 2007: "a central mission of ours is the strengthening and development of Israel's security forces".[8] 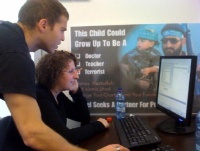 The "Stand With Us" situation room at IDC during operation 'Cast Lead'. The poster in the background depicts children in Gaza as potential terrorists. According to UNICEF some 431 children were killed and 1,872 wounded during the Israeli assault. [9]

IDC has been involved in propaganda operations (or 'hasbara' as it is known in Israel) in support of Israeli attacks on Palestinians. Particularly notable in this regard are the Asper Institute for New Media Diplomacy, which operates within the framework of the Sammy Ofer School of Communications, and the Ambassadors Club founded in the framework of the Raphael Recanati International School. 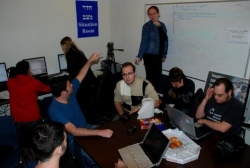 The "Stand With Us" situation room at IDC during operation 'Cast Lead'.

The US pro-Israeli advocacy group Stand With Us has provided support for a number of propaganda operations at IDC. In addition to sponsoring and running the Ambassadors Club bi-monthly seminars, it has supported and sponsored the student initiated group, “Bursting the Bubble,” set up to publicise Qassam rockets fired into Israel. It also created a Situation Room (held in the Yellow-Room/Aquarium) which monitored media coverage during the Israeli assault on Gaza during December 2006 and January 2007. [10]

IDC is entirely privately funded and has called itself 'a non-profit and self-sufficient organization, following the American model of an elite private University.' [11] It has an operational budget, which pays for teaching and administration etc, and a development budget which pays for buildings and facilities. In its first five years IDC raised $25 million in donations for its development budget. Multimillion dollar gifts were received from Ron Lauder, Harry Radzyner and the late Ted Arison, all of whom were rewarded with schools at the IDC named in their honor. [12] The funding section of IDC's website commented in March 2001 that 'We are fortunate to have received enormous financial support which enabled us to convert the ruins of an evacuated army base into a flourishing rural campus.' [13]

More recently a 2007 article in the Jerusalem Report stated that tuition fees cover about 85 percent of operational budget, with the rest coming from donations. [14] The fees are significantly higher than Israel’s public universities. According to an article in The Chronicle of Higher Education, IDC charges $9,000 annually for tuition, compared with $2,000 at most public universities. [15] The development budget, according to that 2009 article is around $12-million. [16]

According to an article in The Chronicle of Higher Education 70 per cent of IDC's development budget comes from Israelis. [17] Substantial donations from extremly wealthy Israelis have funded the college's expansion, and the buildings these tycoons have funded have been named after them or members of their family.

The first major donor the college received was from Harry Radzyner, who according to IDC promotional material was 'one of the first to answer Professor Reichman's call to set up IDC Herzliya.' A donation from Radzyner funded the renovation of an abandoned army base' which became the Radzyner School of Law 'was the first step towards opening the first school year at the Interdisciplinary Center Herzliya.' [18]

Funds for the Raphael Recanati International School were provided by the Recanati family, who control the IDB Holding Corporation, one of the largest business enterprises operating in the private sector of the Israeli economy. The school is named after Raphael Recanati a Greek born Israeli shipping magnate who is described by IDC's protional material as having been 'an enthusiastic Zionist'. According to that account he founded the shipping corporation OSG-Overseas Shipping Group after being 'asked by David Ben-Gurion to set up a shipping company to serve the new state.' [19]

Another shipping magnate, Samuel Ofer, provided funds for the Sammy Ofer School of Communications. Ofer founded what is today Ofer Holdings Group, one of the largest shipping companies in the world.

The are also smaller 'Friends' groups located in the UK, Germany and Hong Kong. The UK Friends of IDC was set up in 2002 by the solicitor and businessman Gordon Hausmann. It is a registered charity but as of July 2009 had filed no information with the Charity Commission.

IDC consists of six schools dedication to law, business, computer science, government diplomacy & Strategy, communications, and psychology. It also has an international school for foreign students. Each of the schools with the exception of the New School of Psychology are named after wealthy individuals who provided the funding. The seven schools and associated research institutes are:

Institute for Policy and Strategy (IPS), which organizes the "Herzliya Conference" every year
International Policy Institute for Counter-Terrorism (ICT) runs the World Summit on Counter-Terrorism which was held for the eighth time on 8-11 September 2008.[22]
Global Research in International Affairs Center (GLORIA) which houses the Project for the Research of Islamist Movements and the Middle East Review of International Affairs (MERIA) Journal[23]
Trilateral Center for European Studies
Project for New Governance in Israel[24]
Institute for Eurasian Studies[25]
Program in Applied Decision Analysis (PADA)[26]
Institute for Renewable Energy Policy[27]

“I expect that the proposals will be opposed by those who see this superficially as an attempt by the United States and Israel to gain legitimacy for their actions.” – Boaz Ganor [30]

During the conflict IDC's Boaz Ganor had dinner in Chicago with the Dean of Syracuse University Mitchel Wallerstein. The two men agreed that, as Ganor put it the Geneva Conventions needed ‘fine-tuning’ for ‘the asymmetric battlefield’, ‘especially in light of the current threats to [Israel and the US].’ [31] Ganor is quoted as saying, ‘We talked about the frustration we had over how the world was relating to the war, mainly the claim that Israel wasn't responding with “proportionality.”’ [32]

According to the Jerusalem Post the meeting between Ganor and Wallerstein ‘led to a series of international video conferences, in which primary avenues for research were identified.’ [33] On 9-10 July 2007 the Interdisciplinary Center hosted a two day ‘workshop’ entitled ‘New Battlefields, Old Laws, From the Hague Conventions to Asymmetric Warfare’. The participants suggested expanding the categories of persons under the Geneva Conventions from just combatants and non-combatants to four new categories which would include ‘illegitimate non-state entities’ who would not be afforded the protection of the Conventions. [34] A second conference, also entitled ‘New Battlefields, Old Laws’ was held in the United States on 8 October 2007, and hosted by Syracuse University's Institute for National Security and Counterterrorism.

The latter conference was criticised by the Catholic weekly the National Catholic Reporter, which said the conference ‘amounts to is a public diplomacy exercise to conceal war crimes.’ [35] After noting the complete lack of evidence that Hezbollah used ‘human shields’, as well as the widespread damage to civilians and civilian infrastructure in Lebanon, the author of the piece Howard Friel concluded that: