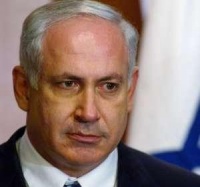 Benjamin Netanyahu (born 21 October 1949) became Prime Minister of Israel for the second time in 2009. He is also currently chairman of the Likud Party.

Netanyahu has been credited by former Secretary of State George Shultz for his central role in effecting a change in American policies on terrorism. [1] In 1979 Netanyahu initiated and organized an international conference against terrorism, under the auspices of the Jonathan Institute — a private foundation dedicated to the study of terrorism, which was named after his brother Jonathan. A second conference was organised in 1984. Through these conferences the institute espoused its doctrine of "preemptive retaliation" the Israeli policy of killing those designated as terrorists before they can act. George Shultz pushed this line at the conference and earlier in appearances before the Denton committee. The 1984 conference also produced a widely reviewed book edited by Netanyahu, Terrorism: How the West Can Win, and established Netanyahu as a leading international voice in the war against terrorism. [2]