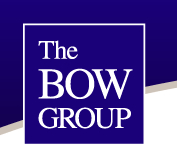 Logo of the Bow Group

According to its own account the Bow Group was set up in in February 1951, 'as an association of Conservative graduates, set up by a number of students who wanted to carry on discussing policy and ideas after they had left university. They were also concerned by the monopoly which socialist ideas had in intellectual university circles. It originally met at Bow, East London, from which it takes its name.'[1]

Geoffrey Howe, William Rees-Mogg and Norman St John Stevas were among those attending the first meeting. Michael Howard, Norman Lamont and Peter Lilley have all held the Bow Group chairmanship. Christopher Bland was Bow Group chairman in 1969. The 2005 election saw the election of Justine Greening, John Penrose and Tobias Ellwood, all of whom had served on Bow Group council. [1]

Those who have served on the Council of the Bow Group, written papers or are members of the group include, among others:[4]