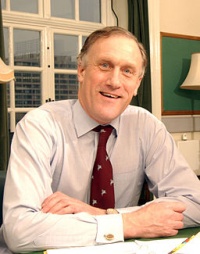 Julian Brazier is the former British Conservative MP for Canterbury and a former armed forces minister.[1] He was unseated by new Labour MP Rosie Duffield in the 2017 general election.

Brazier, who has been described by the Guardian as 'a pro-fox hunting 63-year-old knight of the realm, Oxbridge-educated with a military background and brief career in corporate finance' had been Canterbury's MP for 30 years from 1987-2017. [2]

Brazier was parliamentary undersecretary of state for two years at the Ministry of Defence (MOD) from 2014 until July 2016. He lost his role as minister for reserves in a cabinet reshuffle by the incoming prime minister Theresa May, when he was replaced by Mark Lancaster MP. [3]

Since leaving politics Brazier has taken up a controversial new role as chairman of a private security company.

In January 2018 it emerged that Brazier had been appointed chairman of Pathway Risk Management, a private security company that 'provides counter terrorist and related services for organisations responsible for crowded events and spaces'.

Writing to the Advisory Committee on Business Appointments (ACOBA) Brazier told the Committee 'this is a paid, part-time role, in which he will provide strategic direction and accountability; chair meetings; provide contacts in a range of areas, and assist with media communications. He noted this role will not include any contact with Government'.

ACOBA noted Brazier had not approached it before taking up the role; consequently, it refused to rule retrospectively on his appointment.

Not appropriate to have any contact with government for two years

In response to Brazier's further explanation that his role would involve some contact with the Home Office, the Committee wrote a second letter to Brazier in January 2018 clarifying that 'it does not consider it would be appropriate for Sir Julian to have any contact with Government, including the Home Office, to discuss issues relating to the private security industry' within the two year timeframe that he was subject to the Business Appointment Rules after leaving government.

ACOBA explained that there was 'a significant risk' of any meetings with Home Office officials give rise to a perception that 'you are breaching the lobbying restriction in the Business Appointment Rules'. [4]

He was appointed as a parliamentary under secretary of state at the MOD in July 2014.[5]

Prior to this, Brazier served as an officer in the Territorial Army (Army Reserve) for 13 years, six of them in airborne forces. [6]