From Powerbase
(Redirected from Baroness Chalker)
Jump to: navigation, search 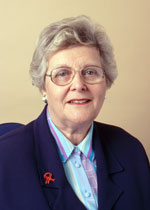 Lynda Chalker, or Baroness Chalker of Wallasey of Leigh-on-Sea (born 29 April 1942) is a British politician and businesswoman particularly involved in corporate investments in Africa.

Chalker began her career as a statistician and market research manager at Unilever's research bureau (1963-69) also working at Shell Mex, Kodak and BP. She became chair of the Young Conservatives from 1970-71 and shortly after this the Chief Executive of the International division of Louis Harris International. In 1977 she became a member of the Royal Institute for International Affairs (RIIA) and later joined the Ditchley Foundation.

Chalker was MP for Wallasey from 1974-92, and following the loss of her seat she was made a life peer. During her time in office Chalker was under-secretary of state DHSS (1979-82), then with the Department of Transport (1982-83) and was Minister of State for Africa & the Commonwealth at the Foreign and Commonwealth Office from 1986-97. She is one of only four ministers who served consecutively throughout the 18-year period of the Thatcher and Major governments in the UK. During this time she defended the government’s often destructive aid policies. John Pilger notes that:

Shortly after the [1991] massacre the British Government increased its aid to the Suharto regime to £81 million, a rise of 250 per cent. The Minister for Overseas Aid, Baroness Chalker, claimed in Parliament that this was "helping the poor in Indonesia". In fact, a large proportion of all British aid to Indonesia is made up of Aid for Trade Provisions (ATP); and much of this is the supply of weapons: British Aerospace, maker of Hawk aircraft, is among the British weapons companies helping Indonesia's poor.[1]

Chalker currently operates as an independent adviser on projects across the mining and investment promotion sector. She develops links with governments and other international organisations in Africa via International Investment Councils in Tanzania, Zambia,[2] Ghana, [3] Nigeria, Uganda, Kenya and sub-Saharan Africa, with business and institutions in Britain (such as the Commonwealth Business Council) which is often undertaken through Africa Matters, which she chairs.[4] Africa Matters was established in 1997, after Chalker lost her government position as Minister for Overseas Development. Its remit is “to assist private sector development in Africa by providing guidance and advice on managing the interface between the public and private sectors.”[5]

Chalker uses Africa Matters to extend her role as co-ordinator of the Honorary International Investor Council for the President of Nigeria alongside a team of former Unilever and FCO people who comprise and run her Chalker Foundation for Africa.[6]

As a non-executive director, Chalker sits on AngloGold Ashanti Corporate Governance Committee, responsible for the monitoring of the general conduct of directors and for the non-financial aspects of safety, health and environmental issues. Human Rights Watch's report, “The Curse of Gold,” provides details of how AngloGold Ashanti “developed links with one murderous armed group, the Nationalist and Integrationist Front (FNI), helping them to access the gold-rich mining site around the town of Mongbwalu in the northeastern Ituri district.”[10] Quotes from the report include:

Witness of atrocities by the UPC armed group in a village near to Mongbwalu:
I saw many people tied up ready to be executed. The UPC said they were going to kill them all. They made the Lendu dig their own graves… [then] they killed the people by hitting them on the head with a sledgehammer.

A Congolese government official:
“We just watch our country’s resources drain away with no benefit to the Congolese people.”

Charles Carter, Vice President at AngloGold Ashanti:
The company has made preparations to “commence exploration drilling on the Kimin prospect [OKIMO] in the Ituri region of the DRC…[W]hile this is obviously a tough environment right now, we are looking forward to the opportunity to fully explore the properties we have in the Congo, believing that we now have access to potentially exciting growth prospects in Central Africa."

Local observer to events in the mining regions:
“Njabu [President of the FNI] now has power due to the gold he controls and [the presence of] AngloGold Ashanti. This is his ace and he will use it to get power in Kinshasa.

AngloGold Ashanti Board members have connections to Cluff Resources Plc (with whom the company operates), part of Algy Cluff's operations (see David French).[11] Also on the board is Council on Foreign Relations' Dr. Chester Arthur Crocker, who is a Professor of Strategic Studies at Georgetown University’s School of Foreign Service, Chairman of the United States Institute of Peace, US Assistant Secretary of State for African Affairs between 1981-89, and a member of the American Academy of Diplomacy and the International Institute of Strategic Studies).

Chalker is also a Non-executive Director of Unilever, and chairs it's Corporate Social Responsibility CSR Committee. At conferences she stresses the need for charities to engage with 'corporates' — with their objectives and operations rather than just thinking of a cash 'donation' — in other words to become subsumed within their ethos.[12]

She makes it plain that there is a: "Shift towards greater degree of partnership even with tough campaigning organisations," with the insistence that:

You are dealing with a business which will be thinking every step of the way: What’s in it for me? [...] Remember that for a corporate the bottom line of the ‘Triple Bottom Line’ is the financial bottom line: CSR is integral to fulfilling a corporate purpose and must contribute to the drive for business growth and success."[13]

Chalker says that CSR is "Not a philanthropic initiative but a marketing programme with social benefits."[14] And this is the line taken in promotions such as Unilever's 'Swasthya Chetna' ('Health Awakening') campaign, that Unilever claims is the "single largest rural health and hygiene educational programme ever undertaken in India."[15]

Unilever is also part of "The Global Public-Private Partnership for Handwashing with Soap" initially devised at the World Summit on Sustainable Development. The project was launched by the World Bank, the London School of Hygiene and Tropical Medicine, USAID, UNICEF, WHO; as well as the three bigggest soap producers: Unilever, Procter & Gamble and Colgate Palmolive in the Indian State of Kerala.[16] In India, half a billion people do not have access to proper sanitation and are scattered around in rural and peri-urban areas. Reaching them is a costly proposition for any soap-selling corporation: and the plan was it would be underwritten and facilitated by the Handwashing Partnership.

Analysis of the success of the campaign have found much 'marketing programme' but little 'social benefit'. Vandana Shiva who authored several highly critical articles argues:

There has also been local resistance to the 'Swasthya Chetna' scheme from environmental and anti-globalisation activists, doctors, local newspapers and opposition groups: The main points of criticism were:

In the face of media attacks and after a long period of inaction, the state cabinet decided to abandon the programme in August 2003.[18]

Chalker is also the chair of the Board of Management of the London School of Hygiene and Tropical Medicine, one of the partners in the project. The School's Environmental Health Group is funded by Unilever.

Chalker is a senior advisor to the merchant bank Merchant Bridge which describes itself as 'the bridge between the Middle-east and the World Financial Markets'. Other senior advisors include Lord Lamont (British-Iranian Chamber of Commerce, Benador Associates, Chairman of Le Cercle) and Lord Denman (Consolidated Goldfields and The Research Institute for the Study of Conflict and Terrorism).

Since 1988 Merchant Bridge has been the advisor to British Government of the Offset Programme, a £1 billion economic investment agreement in Saudi Arabia as part of the notorious Al Yamamah ('the Dove') arms deal. When asked by Lord Judd as to "What arrangements they now have in place to ensure that their overseas programme is never directly or indirectly related to arms deals." Chalker replied:

Merchant Bridge have provided “Knowledge and access to key decision makers in Washington and Iraq”,[20] and the company was Lead Advisor to the Iraqi Ministry of Industry and Minerals for their Lease of Industrial Factories Programme which is looking for quantities of Ready Mixed Concrete. At the same time Chalker was a member of the international advisory board of Lafarge, the world's leading cement producer.

Chalker's Private Secretary (1991-97), Andrew Bearpark, is the current Director General of the British Association of Private Security Companies (BAPSC). BAPSC was formed in February 2006 to exploit the UK's world leadership in “the provision of armed security services.”[21] Bearpark is currently with Olive Security which is a member (together with many private security firms) of British Expertise, which has Chalker on its advisory council.[22] Bearpark and Chalker are also linked through the FreePlay Foundation – both serve as Trustees of the organisation.