In January 2014 Freedom of Information requests made by Greenpeace revealed that the UK Department of Energy and Climate Change (Decc) had emailed what it called "lines to take" to UKOOG before the publication of the potential public health effects of chemical and radioactive pollutants from fracking in a review by Public Health England.

One such line was: "We are confident that there is robust and appropriate regulation in the UK to ensure safe operations that minimise impacts to human health."

In one case the Decc apologised to UKOOG: "Sorry to raise your blood pressure on this subject again, no expletives please!" following a discussion of contentious policy points. In another email, UKOOG's chief executive, Ken Cronin, tells Duarte Figueira, head of Decc's office of unconventional gas and oil: "Thanks for a productive meeting (it's like being set homework)."

A spokeswoman for Decc told the Guardian:

Decc has working relationships with external partners across its portfolio and this is no different with regards to shale gas. It is right and proper that Decc facilitates discussions between companies, regulators and other interested parties as part of this. The government believes that shale gas has the potential to provide the UK with greater energy security, growth and jobs. We are encouraging safe and environmentally sound exploration to determine this potential."

Cronin, of UKOOG, said: "Given the amount of regulatory and wider industry issues at present, you would expect Decc to have a fairly open dialogue with the industry trade body just as Decc has with environmental NGOs, as witnessed by the NGOs' input into the strategic environmental assessment announced in December." 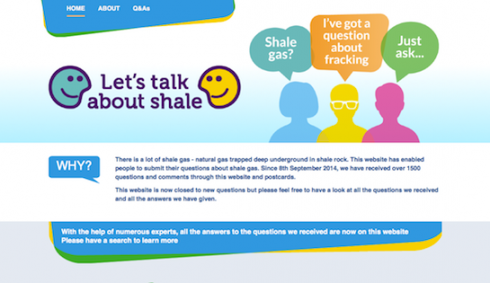 A 'pilot initiative' shale gas 'roadshow' set up in September 2014 by UKOOG, claimed to be 'the first of its kind in the UK' and focused 'on a handful of towns and cities in the North West and East Midlands'. It notably came after the industry's refusal over the summer of 2014 to engage in high-profile 'Talk Fracking' events run by an activist group fronted by the fashion designer Vivienne Westwood.

The ‘Let’s talk about shale’ campaign directly targeted a public audience with careful stakeholder PR usage of the first person about 'hearing and answering YOUR questions on shale gas':

...If you live in one of the pilot areas you may have seen posters and information in your local paper, a postcard through your door, and may have spoken with members of the ‘Let’s talk about shale team’ handing out postcards in shopping centres and high streets. We have also been running local events and discussions with local community groups, and will continue these for the next few weeks.

Over the last few weeks, this website has enabled people to submit their questions about shale gas. Since 8th September, we have received over 1500 questions and comments through this website and postcards.
We have received a huge variety of questions. 17% have been about water, 8% about energy security and we have also received many about safety, air, planning rules, community benefits and regulations. [2]

The campaign included the use of a ‘Let’s talk about shale’ digi-van: a high-tech vehicle equipped with flatscreen TVs - and promotional staff with tablet computers. [3]

UKOOG told local press that it had set up the campaign because 'the public are subjected to a stream of information from a range of sources and much of this information is wrong'. [4] The roadshow was criticised by community and anti-fracking activists for it appearing to be less about talking about fracking than recording questions on postcards. [5]

Professor Sarah O'Hara‎‎, of the University of Nottingham, said: 'Our polling shows people want to know more about shale so I welcome the industry’s efforts.'[4]

However, others were less impressed with this type of public engagement. Jackie Copley, planning manager for the Lancashire branch of Campaign to Protect Rural England, said she believed that people were generally well-informed. 'The industry should give the public a bit of credit... With all due respect, the Let’s Talk About Shale initiative [by the industry body UKOOG] that I saw was really quite patronising.' [6]

Energy minister Claire Perry hosted a roundtable with the fracking industry in May 2018 just hours before she gave evidence to a committee of MPs on the Conservative government's proposed changes to relax the rules on shale gas development in the UK.

In November 2014, former energy minister Matthew Hancock announced government backing for a 'National College for Onshore Oil and Gas' and the provision of £750,000 in funding for its development. The college will provide specialist skills needed by the industry from ‘A’ level equivalents right through to postgraduate degree level, and train teachers and regulators. It will also fund academic research into fracking, and promote careers in the industry to children. [9]

At the announcement, Hancock said:

'Shale gas is an enormous opportunity for the UK and one that we simply can’t afford to miss out on.'

'That’s why we are investing in the people behind the project. Only by arming people with the skills they need to be shale specialists can we provide career opportunities for thousands of young people, boost the power and competitiveness of our firms and help the UK economy remain strong and competitive.'

UKOOG led the bid to set up the college, which was formally set up in September 2015. Ken Cronin, UKOOG's CEO, is also the college's director, alongside Gary Haywood of INEOS, and Lee Petts. It is based in Lancashire. It is jointly funded by the shale industry. [10]

In January 2014 UKOOG announced on Twitter that it was conducting a study with Ernst and Young (EY) into supply chain benefits of shale gas in the UK.

In August 2013 UKOOG was planning to pitch out its Brussels public affairs project for its interaction with European regulators. [12]