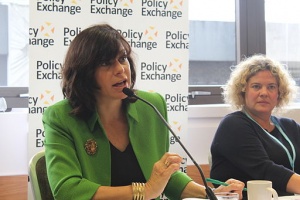 Claire Perry is a British politician who has been the Conservative Party MP for Devizes in Wiltshire since 2010.[1]

She was appointed minister of state for climate change and industry in June 2017, replacing Nick Hurd who was moved to the Home Office. Previously she was a junior transport minister at the Department for Transport from July 2014 until 2016. [2] She also served as an assistant whip at the HM Treasury in 2013 and 2014.[3]

Perry was minister of state for 'Energy and Clean Growth' until July 2019. She stepped down from the role after incoming leader Boris Johnson offered her a position of President of the UK’s COP26 climate talks. In a tweet Perry said:

Delighted to accept new PM’s offer to become COP26 President working closely with him but in order to do the job properly I suggested that I relinquish the broader Clean Growth and Energy portfolio and he has agreed.”

Perry's ministerial responsibilities include promoting the economic benefits of shale gas development in the UK, a role she has embraced.

In an October 2018 interview with The Times, Perry described environmentalists who want to block fracking as 'unrealistic' in their ambition to switch to 100 per cent renewables, as well as raising the spectre of dependence on Russia as a threat to Britain's energy security. “What are they going to cook their kids’ tea on?" she asked. "It’s likely to be gas and do we actually want to be reliant on Mr Putin for our gas supply?”

Perry was criticised for making a "muddled" case for fracking, having previously argued that Britain was "in no way reliant on Russian gas despite what the Russians would have you believe".

Daniel Carey-Dawes of the Campaign to Protect Rural England (CPRE) said: “Using the threat from Russia to justify the UK’s investment in fracking, against the wishes of local communities and advice of leading climate scientists, is an unhelpful diversion from the real issues at stake." [4]

May 2018 roundtable with shale gas companies and suppliers

Claire Perry hosted a May 2018 roundtable with the fracking industry just hours before she gave evidence to a committee of MPs on the Conservative government's proposed changes to relax the rules on shale gas development in the UK.

Perry worked for Bank of America, McKinsey & Company, and Credit Suisse before starting her own small business offering online financial advice to women. In 2007 She was an adviser to George Osborne before being elected as the MP for the Devizes constituency in central Wiltshire in May 2010. [8]

Perry was educated at Nailsea Comprehensive School, Oxford University, and Harvard Business School where she received an MBA. [8]