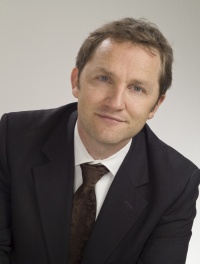 James Purnell MP (born 2 March 1970) is a former Labour MP. He was a leading member of the generation of Labour MPs, often referred to as the "Primrose Hill Gang". Other prominent members include Ed Miliband and David Miliband, Douglas Alexander, Ed Balls and Pat McFadden. Despite being a leading Blairite, Purnell was popular amongst supporters of Gordon Brown too, and his pre-ministerial CV includes a stint as a PPS at the Treasury. He was a Labour Party MP for Stalybridge and Hyde, first being elected at the 2001 general election. He was educated at Balliol College, Oxford. [1]

In 2004, in the government changes following the resignation of David Blunkett, he was appointed an Assistant Government Whip. Following the Labour Party's third successive General Election victory in 2005, he was appointed to the position of Minister (Parliamentary Under-Secretary of State) for Media and Tourism (covering broadcasting, creative industries, tourism and licensing) in the Department for Culture, Media and Sport. In 2006 he was moved to be Minister for Pensions, replacing Stephen Timms. He was the minister in charge of seeing through the legislation that liberalised England and Wales' alcohol licensing laws. On 28 June 2007, he was appointed to secretary of state for culture media and sport, a cabinet position in Gordon Brown's government. Redress editors write: "As such, he will have an oversight role over the British Broadcasting Corporation and the rest of the British media."[2]

Few people outside Westminster would be aware that, despite being only 35, Purnell has been at the heart of the most influential media policy decisions of the past decade. The blueprint for a converged media and telecommunications regulator was set by Purnell in his mid-20s incarnation as research fellow for the Institute for Public Policy Research; the policy foundations for the BBC's leading role in the digital age were laid when he worked for Birt as the BBC's head of corporate planning in the mid 1990s; and the legislation that set up Ofcom, cleared the barriers to a monolithic ITV and paved the way to digital switchover, was a product of his work and that of Ed Richards when they were Downing Street advisers.

Now, mirroring the path from ideas to implementation taken by Richards when he switched from a senior position at No 10 to a senior position at Ofcom, Purnell has completed the transition from thinker to doer. "For me it was wanting to move from an advisory role to doing something," he says of his decision to stand for parliament. [5]

Purnell is amongst those arguing that some criticisms of Israel are anti semitic. For example in a letter to Prospect he argued:

not all criticism of Israel is antisemitic. But some is. As the (non-Jewish) chairman of Labour Friends of Israel for the last two years, I have been shocked by the occasional demonisation of Israel that I've encountered. Israel's government makes mistakes. So do the leaders of the Palestinians. But some people are trying to turn Israel into a global villain, the new pariah regime to take the place of apartheid-era South Africa.

I find it hard to reconcile that image to the reality on the ground-Israel is a democracy, suffering terrorist attacks, surrounded by countries that don't recognise its existence, the victim of well-funded terrorist organisations that preach antisemitic hate. The Palestinians deserve a viable state, and are suffering real poverty and hardship. There is suffering on both sides-neither can solve this problem without the other.

So when some people talk as if Israel is entirely to blame, I ask why. The only answer I can find is that there is something deep in our cultural memory that makes us disposed to blame Jews. That tendency was put in its box by the Holocaust. But today it re-emerges-occasionally, but persistently. I would call it passive, or unexamined, antisemitism.

So not all criticism of Israel is antisemitic. But some is, and we should be very wary of it.[6]

In other words all those campaigning (from the left) for a boycott of Israel are anti-semitic, though as Purnell himself admits his judgment is rather based on an absence of any other option ('the only answer I can find'). It is as if the left have looked at the occupation of Palestinian land and had their analysis almost unknowingly overpowered by some mysterious prejudice 'deep in our cultural memory'.

When James met Liz, Tim and Ed, and they all ended up working for Tony

After spending part of his childhood in France, James Purnell is enrolled at the Royal Grammar in Guildford, Surrey, where he becomes friends with Tim Allan. Also at school in Guildford is Liz Lloyd.

The paths of Tim and James diverge at university: Tim goes to study social and political sciences at Cambridge, while James reads politics, philosophy and economics at Balliol College, Oxford. There, James meets Yvette Cooper, now minister of state for housing; Stephanie Flanders, who went on to work for Bill Clinton and is now Newsnight's economics editor; Christy Swords, now director of regulatory affairs for ITV; and Lucy Walker, now a film-maker, to whom he is engaged.

After university, James and Tim both pitch up in the office of Tony Blair, a rising star in the shadow cabinet. (Liz arrives later, and is now Tony's longest-serving member of staff: she will become deputy chief of staff at No 10 when she returns from maternity leave.) After the 1992 election James goes to work for the media consultants Hydra Associates before becoming a research fellow at the Institute of Public Policy Research. There, he comes up with the idea (and name) for Ofcom. Appearing on the Today programme opposite Patricia Hodgson, then chief strategist for John Birt at the BBC, James impresses Patricia so much that she hires him.

As head of corporate planning, James works on Extending Choice in the Digital Age, the 1996 strategy paper that sets out John's plan to launch the BBC into the multi-channel world. Early work on the plan is done by John's favourite consultants, McKinsey, but the then director general is less than impressed by the result and orders James to cancel his Christmas holidays to knock it into shape. Tim, meanwhile, is rising up the New Labour ladder and becomes deputy to Alastair Campbell, first in opposition and then at No 10. James and Tim are reunited when James joins Downing Street in 1997, as special adviser on culture, media, sport and the knowledge economy.

An avid Arsenal fan, James becomes a member of the Demon Eyes football team that counts another special adviser and future MP Andy Burnham as its top scorer; another teammate is Dan Corry, now special adviser to Ruth Kelly, the education secretary.

Tim leaves Downing Street in 1998 to become director of corporate communications at BSkyB; meanwhile another Birt protege, Ed Richards, controller of corporate strategy at the BBC, becomes part of the No 10 gang, working on preparation for the 2001 election manifesto.

James and Ed do the groundwork for the Communications Act of 2003, which establishes Ofcom and sets the framework for media and telecommunications policy in the digital age.

James quits No 10 to enter the selection process for the 2001 election, and is elected to the safe Greater Manchester seat of Stalybridge and Hyde. After the election, Ed succeeds him as Blair's media policy adviser.

James's first step towards government comes as parliamentary private secretary to Kelly, then financial secretary to the Treasury. In December 2004 he joins the whips' office. After the 2005 election, Tony calls - and James is left to settle into his swanky new office at the Department for Culture, Media and Sport, with good wishes from Tim and his other best friend, David Farr, the playwright.[9]